EUR/GBP to be dominated by Brexit this month

GBP traders will need to keep a close eye on Brexit developments in January, with the UK almost certain to leave the EU by the end of the month.

Members of the Westminster Parliament will return to work after the holiday recess today, Tuesday, with the Withdrawal Agreement Bill top of the agenda. It is almost certain to complete all its stages over the next three weeks, leading to the UK’s exit from the EU at 2300 GMT on Friday, January 31.

In the markets, GBP/USD trading will likely be dominated by developments in the US-Iran conflict so anyone looking to trade Sterling should concentrate on EUR/GBP, although that seems set to trade sideways unless there is an unexpected delay in Parliament passing the Brexit Bill. 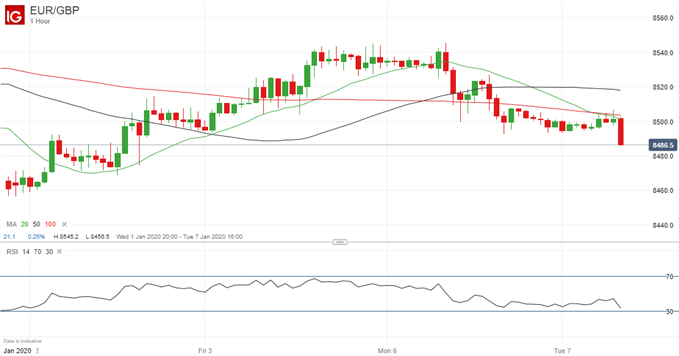 To complete its progress, the Brexit Bill will need to be passed by both the UK Parliament and the European Parliament, leading to a transition period that will last until the end of the year. During this period, the UK will remain in the EU’s customs union and single market. The plan is for the Brexit Bill to be passed by the House of Commons by Thursday this week and to be considered by the House of Lords next week. Any tabled amendments not accepted by the Government are likely to be defeated.

In the meantime, European Commission President Ursula von der Leyen is due in London Wednesday to meet UK Prime Minister Boris Johnson. He has said he will not extend the transition period beyond the end of 2020, while she has warned that reaching an EU-UK trade deal by then will be “extremely challenging”.