The Australian Dollar got a Monday morning lift after data showed China’s retailers and industrial concerns enjoyed a better November.

Retail sales grew by an annualized rate of 8% according to official figures, topping both the 7.6% expected by the market and October’s 7.2% rise. Industrial production grew by 6.2%, handily topping the 5% gain forecast.

Investors had been worried about the effects of trade dispute with the US on both Chinese domestic demand and the health of its huge exporting manufacturing sector. While a single month’s data clearly won’t dispel these concerns, the market may draw a degree of comfort from both upticks which may at minimum suggest that stimulus from Beijing is at least having some effect.

Last week’s news that an interim trade deal had been reached with the US may also have investors looking with hope to the next set of these data.

The Australian Dollar can often act as the foreign exchange market’s top China proxy given Australia’s links to the Chinese economy.

It seems to have done so in this case with a firm bounce seen after the figures. 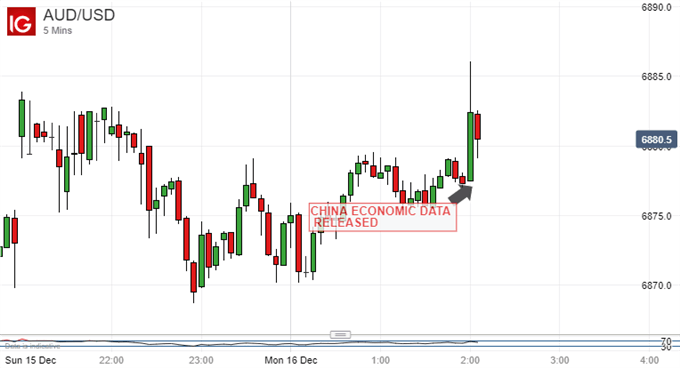 Still, on its daily chart the Australian Dollar has clearly returned some of the gains made last week on news that China and the US were ready to sign that phase-one trade accord. Doubts have grown since about just how substantive that deal can be, and whether a wide-ranging trade settlement will be possible. 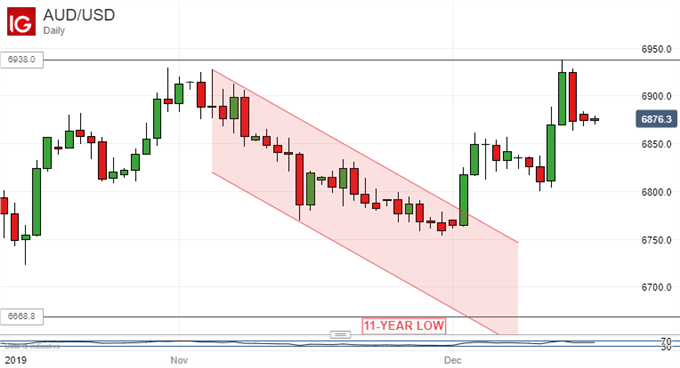 AUD/USD rose to highs not seen for nearly five months as trade news and a convincing win for the UK Conservative Party both helped to fuel risk appetite.

Still, the Aussie remains very short of domestic monetary policy support with interest rates at record lows and predicted to head lower still. Futures markets price in another quarter-point reduction in the 0.75% Official Cash Rate by May of next year, even if they seem very certain that the next monetary policy meeting of the Reserve Bank of Australia, in January, won’t produce a move.