For comprehensive fundamental and technical insight on the US Dollar, download our free 4Q-2019 Forecasts and Trading Guides

Chinese officials just announced that the first phase of trade talks with the United States have ‘achieved a major advancement’ and is the first tangible piece of evidence in the 18-plus month trade war that US-China trade relations are in fact improving.

While Beijing has formally confirmed that it will ramp up purchases of US farm goods such as soybeans, corn and pork, the Asian nation still refuses to provide details on the size of purchases. President Trump has previously mentioned, however, that China would purchase up to $50 billion in agricultural goods. 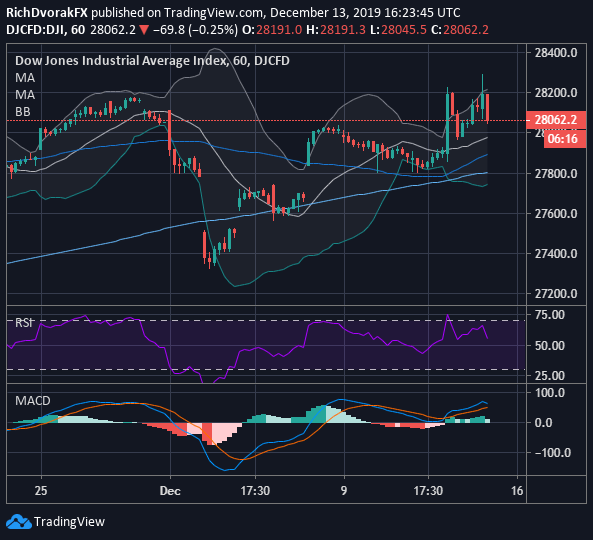 The Dow Jones Index spiked back above the 28,000-price level after China confirmed that Sino-American negotiators have forged ahead and made material progress in trade talks and have reached an agreement on text for a phase one trade deal originally announced mid-October.

Yet, stock market investors still seem a bit skeptical of news that the US and China have reached a trade deal due to the lack of specifics offered to reporters. The Dow Jones has since turned negative on the day after the benchmark initially climbed nearly 0.5% in response to the trade headlines.

Correspondingly, there appears to be an outstanding downside risk to equities that the latest US-China trade war development will chalk up to be a ‘buy the rumor sell the fact’ type of event. This idea is also portrayed by spot USD/CNH price action. 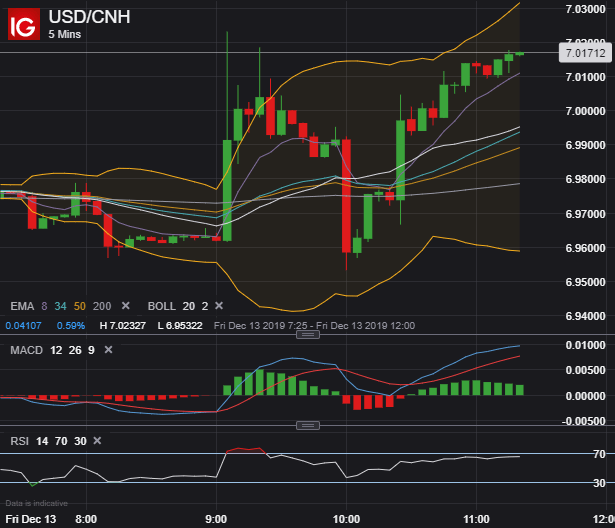 Spot USD/CNH took a nosedive as word that a partial US-China trade deal has been reached in principle was confirmed by the Beijing and reflects the strengthening of the Chinese Yuan. The Chinese Yuan has weakened significantly this year to offset tariffs levied by President Trump on Chinese exports to the US, but spot USD/CNH prices could be expected to retrace back lower with the December 15 tariff tranche now off the table.

Find out why traders should Watch the Chinese Yuan, PBoC for a US-China Trade War Gauge

Though the response in the offshore Yuan was similar to that in the Dow Jones Index as the China trade press conference progressed owing to the ambiguity surrounding specifics of the phase one deal and because current tariffs in place will stay in effect. Moving forward, China’s Vice Minister of Commerce outlined how the partial trade agreement will need to be ratified through formal legal procedures in both countries before President Xi and Trump can sign the phase one deal.

Meanwhile, President Trump stated that phase two talks will begin immediately while specifics on agricultural purchase commitments and further details on the phase one trade deal will be provided 'in the future.' Though US congress remains occupied with impeachment proceedings and ratifying the long-outstanding USMCA deal, which may make it difficult to finalize the phase one trade agreement between Beijing and Washington anytime soon.