It’s a big day for the US Dollar as this morning brought the release of CPI data for the month of November with the December FOMC rate decision looming for later today at 2PM ET. And while the primary focal point is the Federal Reserve, the recent stance out of the bank has put a more intense focus on the data in the effort of gauging when or which direction that next move may be. Case in point, the Friday release of Non-Farm Payrolls brought a strong counter-trend move into the equation after a blowout print. Much of that move has already dissipated, however, as the final FOMC rate decision of 2019 nears.

For this morning’s data, inflation remains a point-of-interest in the effort of gauging that next move out of the FOMC. While the Fed’s preferred inflation gauge is PCE, trends and themes can also be seen in the Consumer Price Index, particularly around the recent shift in policy from the Federal Reserve.

This morning’s headline CPI print came out at 2.1 versus an expectation of 2.0%, and above last month’s print of 1.8%.

US Headline CPI Since August of 2018 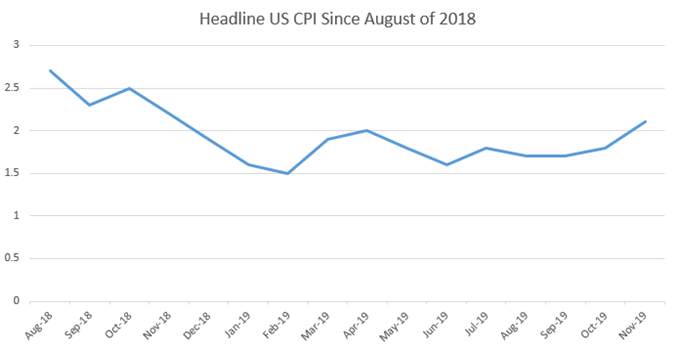 Core CPI, which strips out food and energy, has remained incredibly consistent through this recent shift at the Fed, printing above 2% for now the 21st consecutive month. 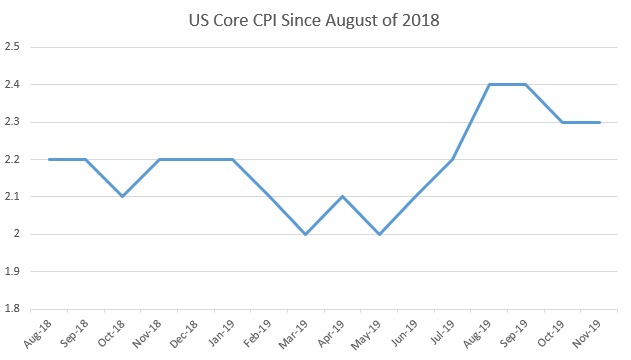 All Eyes on the Fed

In the opening days of Q4 last year, Jerome Powell said that he thought the neutral rate was ‘a long way’ off, widely-inferred to mean that the bank had plans for more rate hikes coming into 2019. At the time, headline CPI was well-above the Fed’s 2% target, printing at 2.3% in September of last year and 2.5% in October. But this headline CPI number began to deteriorate through Q4, finishing the year at 1.9% and continuing to fall through early 2019, just as the Fed was shifting into a more dovish posture.

But, at that most recent rate cut, Jerome Powell remarked that the bank won’t be looking to hike rates unless there was a ‘really significant’ rise in inflation; and given this morning’s data, that’s not a scenario of concern at the present moment.

Focus now shifts to the Fed.