Crude oil has enjoyed a bullish start to December, surging from $55.70 to nearly $60 in less than two weeks of trading. The commodity, in part, has the recent OPEC meeting to thank for the gains and the agreement established among member-nations could pave the way for a continuation higher if the demand outlook is accommodative. Beholden to the laws of supply and demand, the market has been offered relative clarity on the former following OPEC’s decision to deepen production cuts starting January 1, 2020. 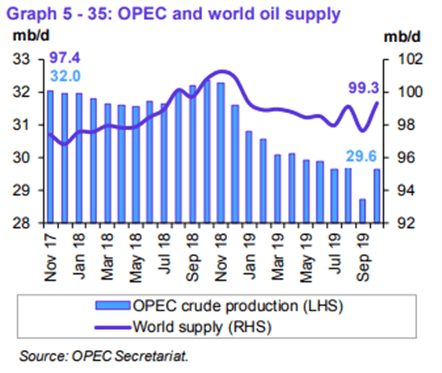 The global oil-producing group and its allies announced on December 6 they would implement an additional production cut of 500,000 barrels a day – resulting in a total supply adjustment of 2.1 million barrels per day, of which 1.7 million is mandated. Therefore, assuming somewhat constant US supply, OPEC’s production cuts, and to a lesser extent the ongoing rail strike in Canada, the commodity may continue to crawl higher in the coming weeks if demand remains within the forecasted range.

With that in mind, crude’s price outlook becomes largely contingent on the status of the US-China trade war. With time winding down until the December 15 tariff deadline, investors are becoming increasingly apprehensive on whether the deadline with be met with an extension or if the Trump administration will impose the tariff hike. In pursuit of a continuation higher, crude oil will likely require a deadline delay for price to stay afloat in the more immediate timeframes as a new round of tariffs would work to erode growth forecasts and risk appetite – thereby undermining crude’s demand outlook. That said, the technical landscape may provide a modicum of encouragement in the interim.

At the time of this article’s publication, crude oil finds itself narrowly beneath Fibonacci resistance around $59.62, a level that may look to keep the commodity contained in the leadup to the December 15 deadline. Conversely, support is present at the nearby 200-day moving average around $57 and is followed a zone of confluence at approximately $55.60.

While $57 could provide buoyancy in the event of modest risk aversion, $55.60 is an area that likely carries much more technical weight given the current backdrop because the underlying trendline has helped to establish a series of higher lows.

Thus, traders should keep an eye out for trade war headlines in the coming days as they could prove to be the deciding factor for crude’s bullish ambitions in the coming weeks. In the meantime, follow @PeterHanksFX on Twitter for news and analysis.