Cable (GBP/USD) remains just off its seven-month high print around 1.3165 as traders start to move to the side lines ahead of next Thursday’s General Election vote. The pound has performed strongly over the last three months and it may be that the currency is becoming fully-valued, considering next week’s risk event. Incumbent PM Boris Johnson still holds a healthy 9-12-point lead according to a variety of recent polls, enough to give him a working majority in Parliament, and the ability to push Brexit through by the end of January. Political commentators were looking for the Conservative lead over Labour to narrow going into the final week - as it happened in 2017 – but this has yet to occur.

Bookmakers are making the Conservative party, strong odds-on favourites to win the election with a majority, and currently it is hard to argue against this. As always, one major slip-up from either one of the two major parties may make a difference to the polls in the last couple of days.

Ahead the latest US non-farm payroll report with the market expecting 183,000 new jobs created in November. This figure may be high if there is any correlation to this week’s private jobs report – ADP – which saw just 67,000 jobs created compared to expectations of 140,000 and a prior month’s 125,000.

The IG Client Sentiment indicator shows traders are 57% net-short GBP/USD, which normally would give us a bullish contrarian bias. However, recent daily and weekly changes currently give us a bearish outlook for GBP/USD. 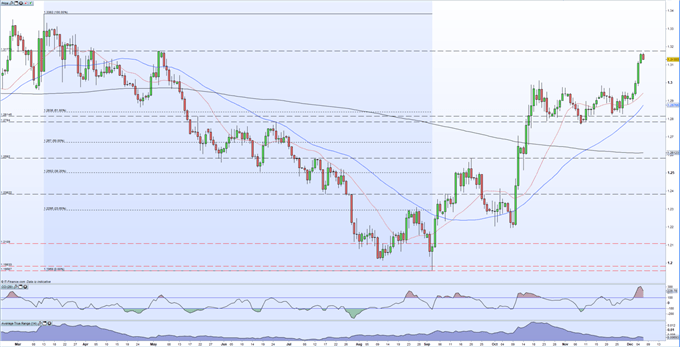