GBP/USD opens the session comfortably above 1.2900 as traders continue to price-in a conservative majority at next week’s General Election. Cable is trading either side of 1.2920 and is within 30 ticks of last week’s high. Westminster voting intention polls overall show the Conservative Party with a healthy lead over Labour, between 10-12 points, but the market is paying attention to the latest BMG/Independent poll which showed the Conservatives lead cut to just six points.

According to Robert Struthers, head of BMG,

“With less than two weeks until polling day, our latest vote intention numbers show Labour starting to close the gap. The shifts we have witnessed in our headline voting intention figures take the Conservative lead from a likely majority into possible hung parliament territory. And while the margin of error – a feature of all polls – means this shift may not be as large as the headline suggests, it does add weight to other existing polling evidence which shows the Labour Party starting to build momentum.”

GBP/USD will likely remain around current levels ahead of next week’s General Election with little reason to take a position, either way, as it stands. The daily chart remains positive and suggests a break higher is near. A break above the October 23 high at 1.3013 sees the May 3 high at 1.3177 come into play before a full retrace back to 1.3382. Cable is above all three moving averages and the 61.8% Fibonacci retracement at 1.2838. This Fibonacci number should also provide support if any short-term sell-off occurs. 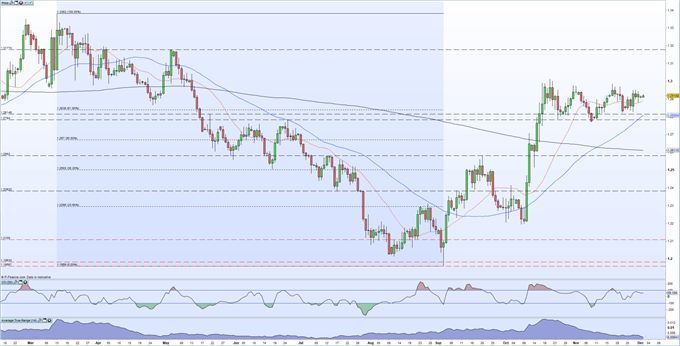