The Australian Dollar went into sharp retreat Tuesday following the release of minutes from the Reserve Bank of Australia’s last monetary policy meeting which showed a central bank still very ready to cut interest rates from their current record lows.

That November 4 meeting saw the key Official Cash Rate left alone at 0.75%, but the minutes revealed that policy makers accepted that the ‘case could be made’ for a cut at that point. The board recognized the negative effect of lower rates on savers and confidence but said that it was prepared to ease further if needed in the face of considerable uncertainties, notably that over household consumption.

Futures markets had accepted that lower rates were possible but Australia’s staggering levels of household debt, the fruit of years of historically low borrowing costs, had investors pretty sure that the bar to further cuts was pretty high.

The minutes suggested that this might not be the case after all. Although consideration of the negative effects of lower rates, and the suspicion that further easing might not have the value it had in the past, still clearly lingers at the RBA, it is obviously prepared to cut further if it judges that its mandate requires that, and perhaps quite soon.

With this in mind it’s hardly surprising that AUD/USD should have taken a hit, as it did. 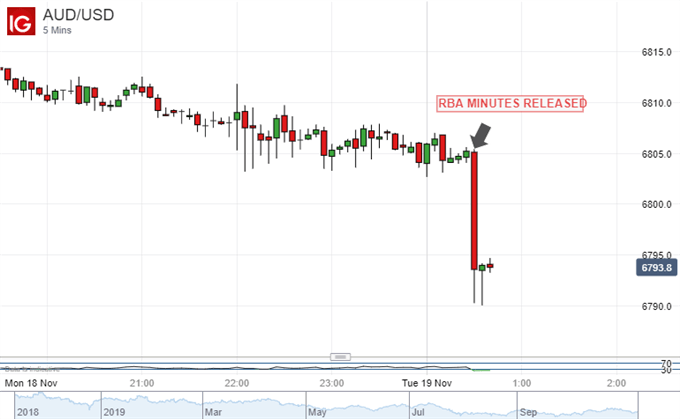 On its broader daily chart, the currency is under even more pressure. A surprisingly weak set of domestic employment numbers last week really smashed the bulls’ confidence. In an environment where the US Dollar remains comparatively strong, the Aussie may well struggle much harder if the idea that its already feeble monetary policy support could weaken further. 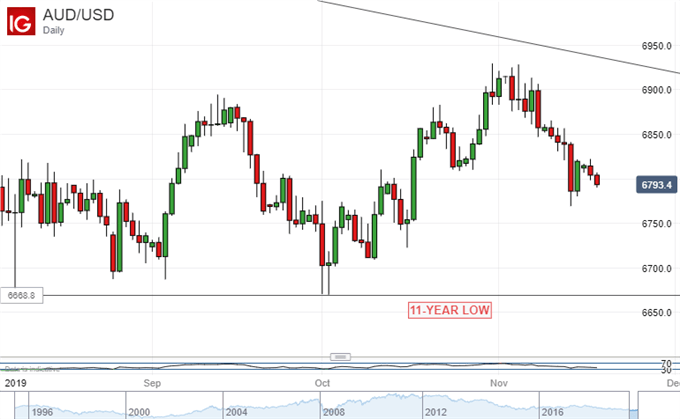 AUD/USD has retreated even further below its long dominant downtrend line and further weakness may put focus rapidly back on the eleven-year lows of October. Signs of a trade settlement between China and the US may see the currency spring back, as pre-eminent global growth play. But it would have to be a broad an durable deal indeed to cure what ails the Australian Dollar.