The Australian Dollar was initially a little weaker against its US counterpart on Tuesday as the Reserve Bank of Australia kept interest rates on hold at their latest record low.

This outcome had been widely expected in the market, priced in at well over 90% by futures markets. In an accompanying statement the RBA stuck very much to recent themes, cautioning that an extended period of low interest rates was a reasonable expectation. It also assured the market that it stood ready to cut again should that be needed to support sustainable growth.

The central bank also stuck broadly with its growth and inflation forecasts. It still sees consumer price rises close to the 2% lower bound of its target band for this year as a whole, and just above that for 2021. The latest read showed inflation of just 1.8%, however.

AUD/USD headed lower after the decision but, once the market had time to assess the statement, it steadied and began to climb again. In truth there was nothing new here for it, and little reason to suppose that the RBA will do anything at least in the near-term than leave rates alone. 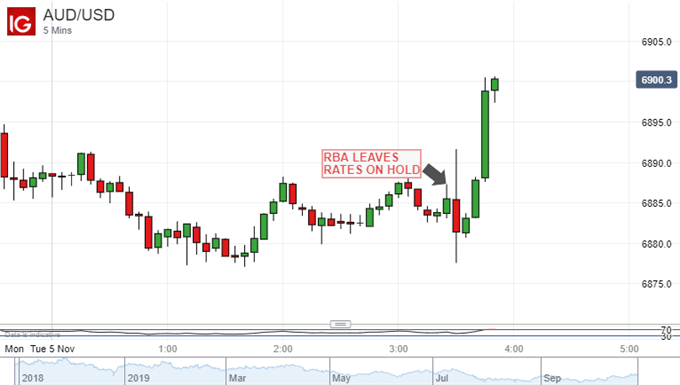 On its daily chart, AUD/USD has put in an impressive rally since the start of October. This was driven by a general increase in risk appetite, spurred at least in by hopes for a trade accord between China and the United States. The Federal Reserve’s October interest rate cut also helped the Australian Dollar’s cause as the greenback weakened in the aftermath despite the move being well expected, and the Fed’s own prognosis that more cuts are not necessarily coming. 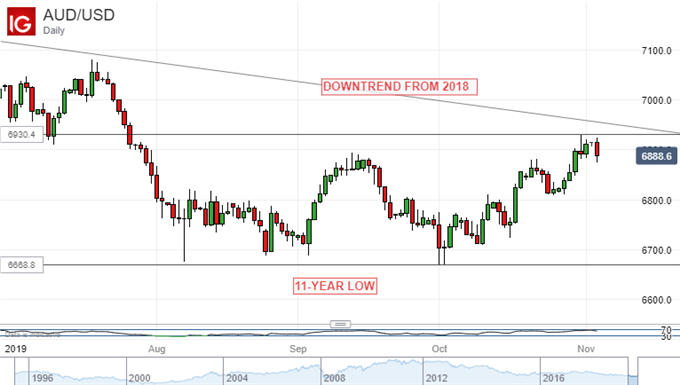 This cheer has taken AUD/USD very close to a trial of the pervasive downtrend which has been in place since late 2018.

However, the futures market still think that Australian rates could well go lower as we move into 2020. For as long as that remains its prognosis the currency will be vulnerable to reverses when global risk appetite wanes.