The Dow Jones tumbled 100 points on the back of news that US-China trade talks have reached an impasse on agricultural purchases. In recent weeks, President Trump has heralded China’s decision to restart purchases of US farm goods as a sign of good faith in the ongoing negotiations. Now, however, the reported “snag” goes to show that the two sides may not be as far along in the negotiation process as many market participants were led to believe and the Dow Jones could have cashed in on trade progress that was nonexistent. 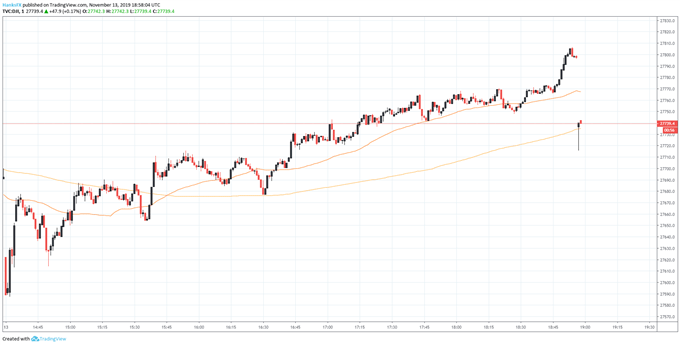 Consequently, the perceived odds of a phase one trade deal have been undermined. Originally scheduled for this weekend, the initial meeting was cancelled due to protests in Chile and a new location has yet to be agreed upon. Further, during his address at the Economic Forum in New York on Tuesday, President Trump stated if a phase one deal is not reached, the December 15 tariffs on consumer goods would indeed be implemented. Thus, the only certainty the market can cling to at this time is an increase in tariffs if a deal is not met – which could rattle investor confidence and the Dow Jones if relations fail to improve. 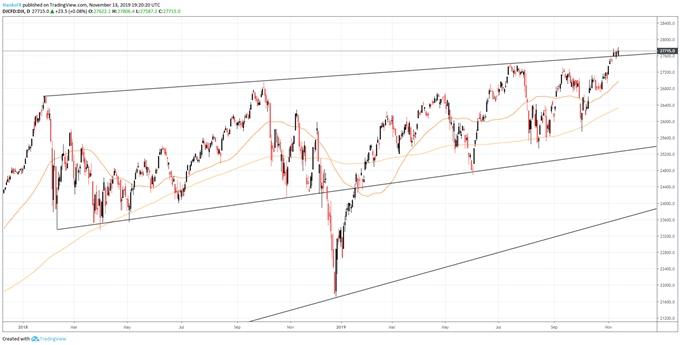 Still, it is too soon to declare the news as a sign the talks have derailed completely. Thus, the medium-term outlook remains encouraging with an accommodative Fed and relatively stable economic data behind it – calming recessionary fears. Nevertheless, the Dow Jones, Nasdaq 100 and S&P 500 alongside other risk assets may suffer in the shorter term as the market readjusts expectations around the economic conflict. In the meantime, follow @PeterHanksFX on Twitter for further updates and analysis.