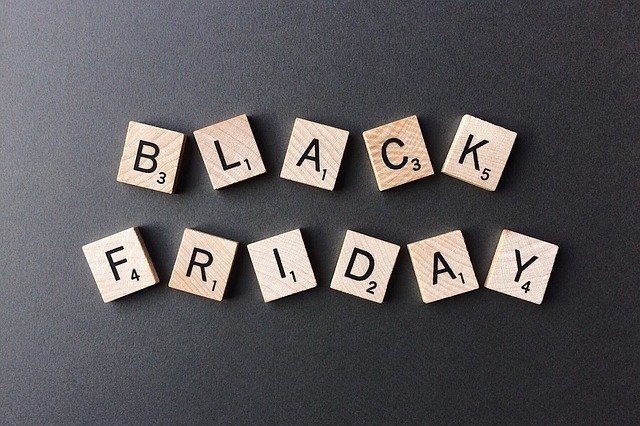 First it was known for the Black Friday stock market crash – then for being the biggest shopping day of the year. The meaning may have evolved, but today, Black Friday is still a subject for stock market scrutiny. Which retailers look set to benefit? What can we learn from the price action of past years? And what factors help you trade the period? We’ll find out. But first, a history lesson. 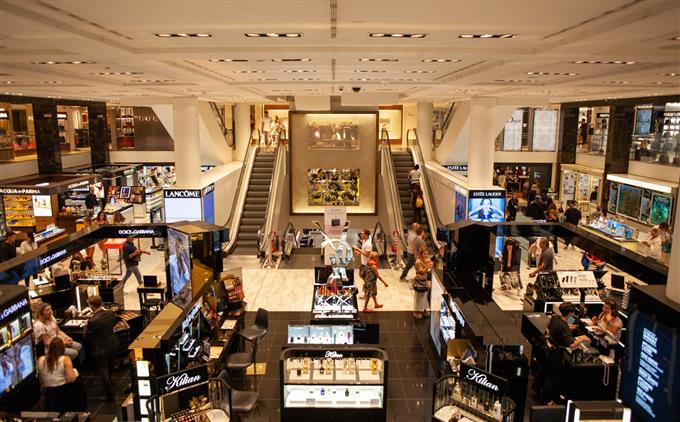 What is Black Friday?

Black Friday was originally the term used to describe the stock market collapse of 1869, when American investors Jay Gould and James Fisk caused a financial meltdown after a failed attempt to corner the gold market.

The modern concept of Black Friday, however, came about in the 1940s to entice people to the shops the day after Thanksgiving. Named for its tendency to contribute to traffic accidents, Black Friday later took on a new meaning as companies expected to make enough sales to put them ‘in the black’, or profitable, for the year.

It was not until the 1980s, however, that retailers began to slowly use the day as a marketing tool, culminating in its widely-held status as the most popular shopping day of the year in the 2000s. Today, Black Friday is more than just a US-based tradition; it has spread to some 20 other countries, including Mexico, Russia and Pakistan.

In conjunction with Cyber Monday, the Monday after Thanksgiving that pushes online sales, the shopping period is seen by some analysts and market commentators as providing a measure of economic prosperity. That measure can then be used to predict the performance of other assets such as stocks.

The influence of Black Friday

Marketing gimmick or useful indicator; what’s the overall influence of Black Friday? To answer, it’s worth examining its impact on retail spending and consumers, the economy, and the resulting effect (if any) on traders and stocks.

There is no doubt that Black Friday influences consumers to spend. Across a range of countries, the event is promoted as a rare chance to save money across a gamut of products, from laptops to lawnmowers, and historical media coverage of the event has featured stampedes in retail outlets as bargain-hungry punters battle for deals. In 2018, Adobe Analytics data shows $6.22 bn was spent online in the US, representing a 23.6% increase on the previous year. Furthermore, every Black Friday bar one has seen higher retail sales volume than any other date.

Black Friday’s influence on the economy is more debatable. Some argue in favor of the Keynesian effect of spending driving economic activity, which puts more money into circulation and potentially buoys the economy. At a time when the US economy has shown signs of recession, consumer spending might be welcomed. But others say that the influence of the event is negligible, with only short-term effects observed. This is due in part to lessons from previous years, when many retailers have seen poor sales figures once the discounting has ended.

However, if stores decide to go another route and prolong discounts, profit margins can be eroded, potentially meaning staff cuts and increased unemployment. Knock-on economic effects of this could include decreased income tax receipts and a raised welfare burden, factors which raise an argument for Black Friday having a net negative economic effect.

The influence of Black Friday on stock markets and individual stocks is also less than straightforward. Perhaps predictably, a range of retail stocks can be expected to rise if sales expectations are met. Conversely, unexpectedly weak sales can suggest poor consumer confidence and a fragile underlying economy, giving traders reason to go short. But even if a given company has enjoyed strong sales, this performance has no bearing on its profitability or overall financial health, which are factors traders should consider when picking one stock over another.

Examining the impact of previous Black Fridays on financial markets gives an insight into the trends traders might expect to see following this key date in the future.

While Black Friday history begins with the catastrophic 1869 stock market crash, the modern iteration of Black Friday has seen retail stocks making strong returns around the Black Friday period. This can be observed in the S&P 500where, in a ten-year timeframe, Bloomberg data shows a 5% return for retail stocks compared to an average 3% over a period of one week before Black Friday to one week after.

The Black Friday periods 2014-2018 are circled on the S&P 500 chart below. However, while such data suggests that retail stocks perform well over this period, stock pickers should be aware of the nuances between retail sub-sectors as well as the likelihood of online sales taking business from more brick-and-mortar reliant stocks, as well as additional fundamental factors that can move the market. 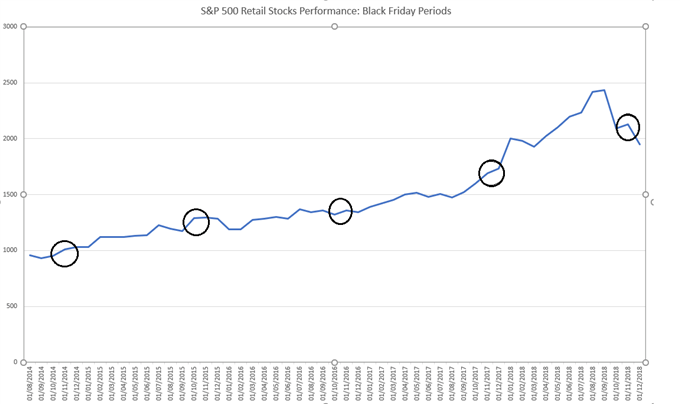 Amazon reaped the rewards in 2018, enjoying its biggest shopping day in history on Cyber Monday. Customers ordered more than 18 million toys and 13 million fashion items on Black Friday and Cyber Monday combined, according to Bloomberg data, and saw its share price rise to the tune of 11% over the two-week period from November 16 to November 30, as the table shows.

On the short side, while Target shares saw a dip of 12% over the same period, the fall can probably be attributed more to a wider fall in the stock market caused by trade wars and concerns about global growth than any other factors. This underlines the importance of traders considering a range of fundamental reasons that can contribute to moves during the holiday season.

Once you have assessed the market and gained a feel for the retailers maximizing Black Friday sales, there are a variety of other considerations to make when trading stocks around this period.

What time does the stock market close on black Friday?

The stock market open on Black Friday is 9:30 ET as normal, but the market closes at 1pm. The market is closed for the whole of Thanksgiving.