The month of October came and went with little volatility to speak of. While there were notable fundamental developments ranging from Brexit to trade deals to impeachment concerns, none of them resulted in enough fear that is typically experienced in October. Indeed, this time last year the market was in the midst of a brutal selloff, one that would only extend further as November and December progressed. 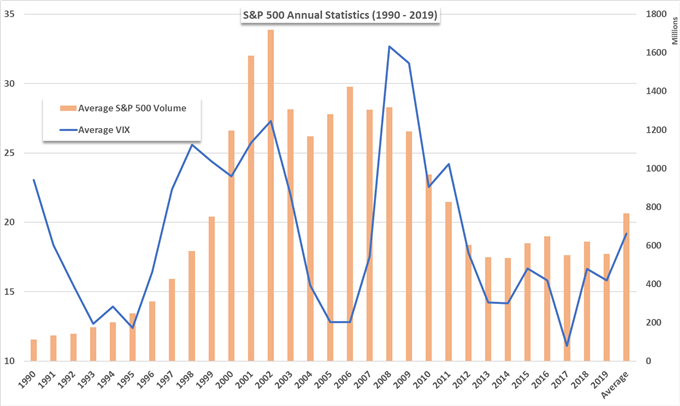 This year, however, October recorded an average VIX of just 15.61 – notably lower than the 21.52 average observed since 1990. Further, data displays a distinct lack of volatility throughout 2019, with most months falling beneath their longer-term levels. Thus, it begs the question, is the market due for an abrupt resurgence of volatility to round out the year? Such an occurrence would eerily coincide with last year’s concluding months but would require a catalyst.

As it stands, risk trends appear to be improving. The United States and China are seemingly on the path toward a phase one trade deal, a prospect that has gripped the market - however unlikely it’s materialization may be. Elsewhere, the world’s leading central banks have enacted their dovish machinations which has helped to stave off global recessionary fears. In turn, equity markets have pushed to new heights in the United States and the VIX rests beneath 14 as we enter November, suggesting there is little cause for concern.

Another driving factor of low volatility could be derived from investor familiarity with themes that would typically warrant concern – a theory we can find evidence of in a variety of ongoing issues. To start, the US-China trade war has been raging for months. Consequently, the market has become accustom to the news cycle that follows. An improvement in talks, followed by a breakdown, which eventually results in talks restarting again. This cycle has been repeated incessantly over the last 18 months and markets have shown they afford it less consideration each time.

Check out our year-end forecasts for the Dow Jones, US Dollar, Gold, Crude Oil and more.

Elsewhere, Brexit remains a key uncertainty. Although one of the world’s largest economies is on the brink of entering the unknown, an unknown which could have potentially catastrophic impacts on trade, markets have been exhausted. The continuos headlines of votes and debates have come to the point where it seems few have a grasp on what is going on anymore. Among those that are in touch with the House of Parliament’s proceedings, it seems even fewer care.

Further still, many nations have been wracked with protests. Ranging from Chile to Iraq, economies have sputtered because of internal struggles, most notably with Hong Kong’s recent slip into recession. Together, they have worked to erode investor confidence in key emerging markets, which could potentially undercut the tailwind from dovish monetary policy. Evidently, the world – and the market by extension - is filled with potential flashpoints, yet volatility lacks nonetheless. 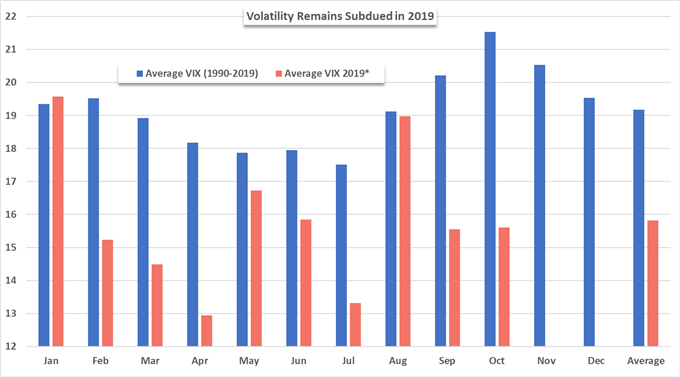 Thus, it seems most logical to argue that market participants have come to accept the current levels of risk as the new normal, an acceptance that reeks of complacency - in my opinion. With that in mind, the month ahead has historically been the second most volatile month on average since 1990, allowing November the opportunity to compensate for October’s calm.

Regardless, the current market climate suggests a groundbreaking catalyst may be required to resuscitate the VIX, but to argue the geopolitical and economic landscape is devoid of risk is simply untrue. As the market awaits such a spark, follow @PeterHanksFX on Twitter for further updates and analysis.