A mixed bag of PMIs to start the session with France outperforming and Germany remaining mired. A strong set of French data started moved EUR/USD higher at off with the private sector rebounding strongly, while manufacturing output stayed in positive territory after flirting with contraction last month. A short while later the German data highlighted the ongoing downturn in the economy with employment falling for the first time in six years.

According to Phil Smith, principal economist at IHS Markit, ‘Hopes of a return to growth in Germany in the final quarter have been somewhat dashed by the October flash PMI numbers, which show business activity in the eurozone’s largest economy contracting further and underlying demand continuing to soften’. He added,

‘Perhaps most concerning are the signs of increasing strain on the domestic economy, with growth of service sector activity slowing to the weakest since September 2016 and employment now in decline for the first time in six years.’ The German economy is expected to enter technical recession – two quarters of negative growth – when the Q3 GDP numbers are released in mid-November.

EUR/USD remains under pressure with little in the way of bullish momentum to push the pair higher. The technical set-up for the pair remains neutral to negative with the 200-day moving average, currently around 1.1175, capping the upside in the short-term. While today’s ECB meeting is expected to be neutral and more of a farewell party for President Draghi, a break and a close above the 200-dma opens the way to 1.1249, the August 6 lower high. To the downside, big figure support at 1.1100 before 1.0926, the double lows seen in early/mid-September. 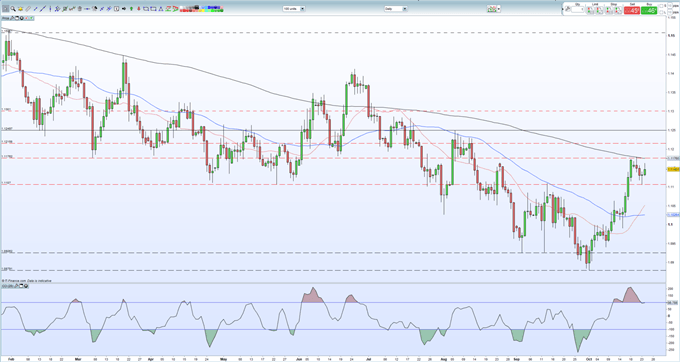 However recent daily and weekly positional changes give us a mixed outlook for EUR/USD.

What is your view on the Euro and the US Dollar – bullish or bearish?? You can let us know via the form at the end of this piece or you can contact the author at nicholas.cawley@ig.comor via Twitter @nickcawley1.