A story emanating from the UK Times newspaper saying that the EU is willing to offer the UK a time limited Northern Ireland Backstop to break the current Brexit stalemate. GBPUSD jumps 60 pips to 1.2270 on the rumor which has yet to be confirmed or denied by either side.

According to the Times story, EU officials will allow a double majority in Northern Ireland to leave the new Irish backstop after as yet an unspecified number of years. The story later said that 2025 had been mooted. This offer – if confirmed – would be a Northern Ireland backstop but time limited by consent of the people of Northern Ireland. This concession would be a major move by the EU towards breaking the current Brexit deadlock which has been centered around the Irish backstop.

As we write, the UK government is said to be dismissive of the idea as it says that it will not accept any Irish backstop, even if it comes with a time limit attached. According to the Times, Conservative MP Iain Duncan Smith said, ‘this looks suspiciously like (the) EU realizing they are about to look like the bad guys, making a tokenistic offer - this is about shifting blame to Boris Johnson'.

GBP/USD jumped on the news and hit a spike high just below 1.2300 before fading lower. Traders are now making assumptions that if the proposal gathers momentum, the risk of a no-deal Brexit decreases. Talks between the UK and Ireland are set for the end of this week. 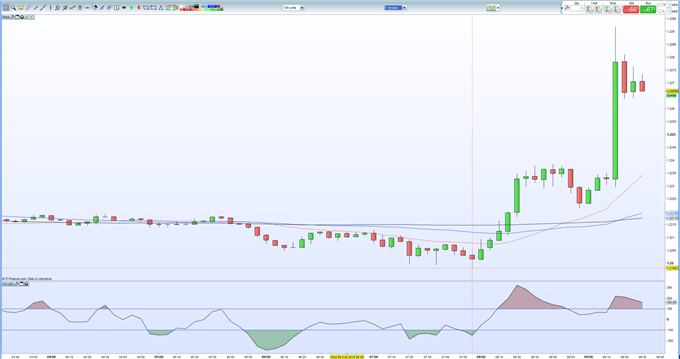