Less than two days after presenting his new Brexit proposal, UK PM Boris Johnson is finding that the EU remain a tough nut to crack. A variety of EU officials and leaders have commented that the UK’s plans fall short in several areas, and as such will not push for the plan to go through. While Johnson continues to say that the UK will leave on October 31, deal or no-deal, the odds are now shorting on the UK asking for another Brexit extension, despite Johnson’s reluctance. While further uncertainty may weigh on the British Pound, an extension may well give GBP a short-term boost as a no-deal outcome becomes less likely.

The Brexit narrative will continue to steer Sterling in the short-to-medium term although today’s price action will be primarily driven by the monthly US Labor report. The US economy, while still fairly robust in global terms, is weakening with recent US data turning lower. This week’s ISM manufacturing and composite numbers hit a 10-year and 3-year low respectively, with market commentators now musing that today’s NFP may miss expectations of +145k. If today’s number fails to match last month’s lowly +130k, then calls for two further US rate cuts this year will increase. A 0.25% cut is nearly fully priced in at this month’s FOMC meeting, and any signs of growing weakness in the US jobs market will fuel calls for another 0.25% cut at the December meeting.

GBPUSD is currently trading either side of 1.2340, after having hit a one-week high of 1.2414 yesterday. The pair have bounced off the 50-day moving average and have just moved out of oversold territory, using the CCI indicator. The 20-day ma currently sits at 1.2400 and may prove supportive in the short-term although for GBPUSD to begin to turn bullish, a close above 1.2582 is needed to convincingly break a series of lower highs. The current head and shoulders set-up however suggest lower prices, so support levels may be tested shortly. 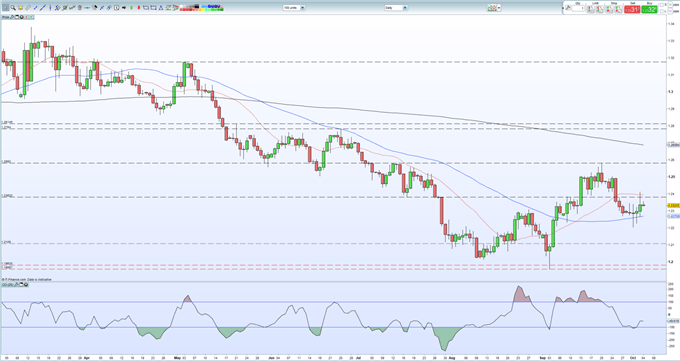