US-China trade hopes buoyed some Asia Pacific stocks Thursday but regional economic data increasingly appear to underscore the need for a near-term settlement between the two.

US President Donald Trump told reporters on Wednesday that such a deal could come ‘sooner than you think’ while adding that the US and Japan had reached an initial trade deal. However, official numbers Thursday showed Singapore’s factory output plunged 8% on the year last month, extending the bellwether republic’s manufacturing malaise into a fourth month. The collapse was much worse than the 0.1% seen in July and far below market expectations.

The numbers could worsen fears that Singapore could see two quarters of negative growth- the technical definition of recession- and they come after China’s Beige Book Wednesday painted a picture of slowing growth and rising debt in the third quarter. Japan, Korea and Taiwan have all seen their economies pressured by trade’s slowdown.

Still, the Nikkei 225 was up by 0.3% with robot maker Fanuc leading the gainers. The Hang Seng up by a similar amount as its afternoon session got under way. The Shanghai Composite was down 0.7% with the ASX 200 off by 0.5%. Silver Lake Resources was the biggest faller on that index, retreating with the gold price. At the other end of the scale lottery ticket seller Jumbo Interactive caught a bid despite a lack of obvious news around the stock.

The US Dollar found early support on those trade hopes, and by the apparently limited prospect of impeachment proceedings against Donald Trump making much near-term progress. However, the Greenback slipped back a little against the Japanese Yen and Australian Dollar as the session wore on, although those weak Singapore numbers kept it up against the Singapore Dollar.

Crude oil prices continued to slip back from the peaks reached earlier this month in the wake of drone strikes on Key Saudi production infrastructure. Trade hopes support this market too, of course, but Wednesday’s news of a surprise US inventory build is weighing on prices. 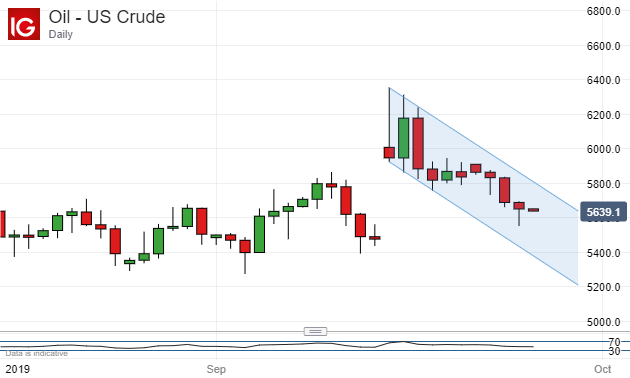 Technically speaking the price is now testing support at the uptrend from August’s lows, with focus likely to be on the psychologically important $50/barrel area should falls intensify from here.