The Australian Dollar reverted to its sometime role as the markets’ favorite liquid China proxy on Wednesday and was duly hit, if not for very long, by a triple dose of weak official data out of the world’s second largest economy.

July’s industrial production rose by an annualized 4.8%, well below the 6% expected and June’s 6.3% gain. Retail sales rose 7.6%, below the 8.6% hoped for, while fixed asset investment came in at 5.7%, admittedly only just under the forecast 5.8% gain.

There had been a sense of hope in the market that China was weathering trade storms with the US rather better than might have been expected. These numbers don’t exactly disprove that thesis but do suggest that at the very least forecasters had become a little too optimistic about the country’s economic resilience.

AUDUSD went sharply lower on the data release, but its falls were soon arrested with focus likely more on events in Hong Kong where political unrest and Beijing’s response to it continue to pinion investor attentions during Asia Pacific trading hours. 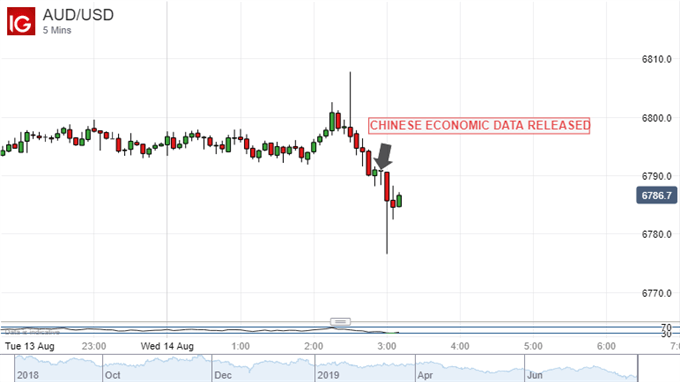 On its daily chart the Australian Dollar remains close to the eleven-year lows plumbed earlier this month. A clear confluence of negatives continues to plague the currency. General risk aversion and worries about global growth create a toxic backdrop for the pro-cyclical Aussie but there are some worrying specifics in the mix too.

The Reserve Bank of New Zealand’s surprise chunky half-percentage-point interest rate cut earlier this month saw investors price in similarly-sized reductions in Australia, when before only a single further reduction was confidently discounted.

Given this it’s no wonder that the Aussie should be under strain, as it clearly is. 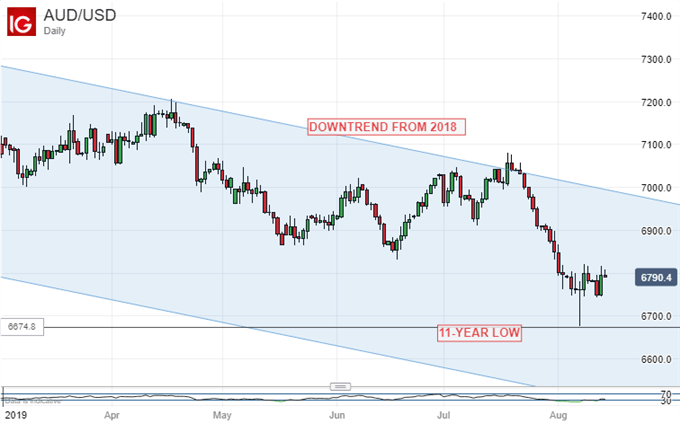 Any sign that Beijing and Washington are getting closer on trade could see things perk up for Aussie bulls, as could continued strength in Australia’s resilient labor market. The Reserve Bank of Australia is known to be watching metrics connected to that very closely.

However, for as long as the currency is perceived to suffer from such a complete lack of domestic monetary support it will be very hard to get bullish on it for long.