Asia Pacific Stocks Up On US Tariff Delays, Report Trade Talks Still On

Most Asia Pacific stock markets were in the green as Wednesday’s trade wound down, with the region’s plentiful Apple components suppliers doing especially well on news that cellphones will be among products on which US tariff application will be delayed.

There was also some late-session cheer from a Bloomberg report which said that Chinese officials will still meet their US counterparts in Washington next month, although the report did go on to caution that optimism was not high.

The Nikkei 225 remains under obvious pressure but has bounced at the 100% retracement point of its rise from June up to the peaks of late July. 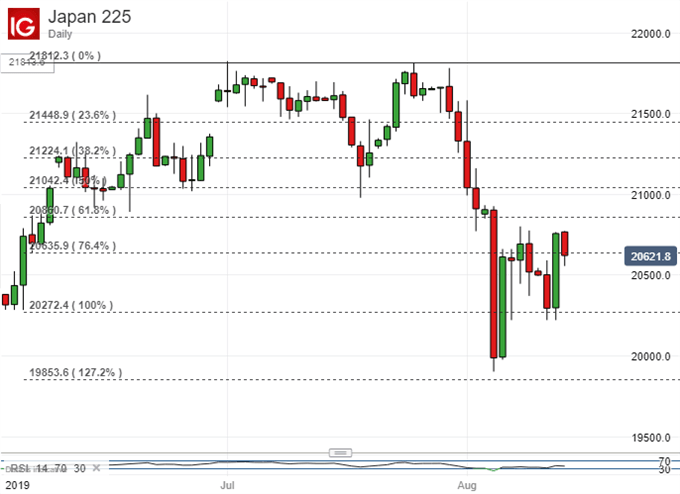 The index appears to have nascent technical support at the 76.4% retracement level now. That comes in at 20,635 and so is by no means secure, however. That level bears watching this week.

Over in Sydney the ASX 200 failed to hold early gains and was flat as its afternoon session began. National Australia Bank slipped after an update, while packaging company Pact Group saw a 16% slide as its full-year results failed to please.

Retirement living company Aveo Group was the best performer on a takeover approach.

Stocks were broadly resilient in the face of Chinese retail and industrial production numbers for July which missed forecasts, especially badly in the former case. The Australian Dollar initially slipped on these, but the response may simply have been down to economists becoming a little too optimistic about China’s ability to weather trade war storms.

The equity markets also seemed able to look past ongoing political tensions in Hong Kong, despite the reported proliferation of Chinese police and military in nearby Shenzhen. Foreign exchange was not so sanguine with the haven Japanese Yen continuing to gain at the expense of more pro-cyclical units like the Australian Dollar.