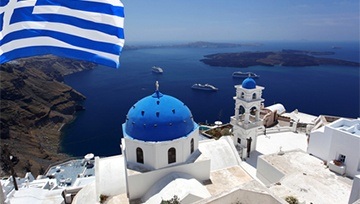 Conservatives Return to Greece, EUR Fails to Consolidate a Direction

Greece, the Eurozone’s most indebted country, has changed its left-wing populist party as centre-right New Democracy party won Sunday’s election with pledges to reduce taxes and boost growth through investment.

Alexis Tsipras’s left-wing party Syriza rose to power in 2015 when he pledged to end the era of austerity promising Greeks he would lead the country’s recovery. But his popularity was short-lived as he soon turned on his campaign promise and accepter tougher fiscal measure in order to gain international monetary backing. Four years later, and with Greeks wanting a change of direction, Kyriakos Mitsotakis’s centre-right party New Democracy swept up a majority of votes on Sunday’s elections. The former banker and consultant is no new face to politics as his family is one of the most powerful in Greek politics with both his father and sister having held important roles in the past.

EUR pairs have remained mostly unchanged throughout the morning session as differing opinions about the change in government keeps the euro from consolidating a direction. Whilst Mr Mitsotakis is viewed as traditionally market-friendly, with promises to improve its business activity and attract foreign investment, he has also pledged to reduce taxes in a time where the Greek economy continues to struggle to pay back the Eurozone on its three bailouts, which have left Greek debt at more than 150% of its GDP. Most EUR pairs received with positivity the result of the election with a push higher for the euro, but the mild gains were quickly corrected throughout the morning session. EURUSD opened the session on Sunday night at 1.1231 after falling below the 1.1230 handle in Friday’s trading session on report of better than expected US jobs data, and the pair has since then traded in a tight 14-pip session. EURJPY has seen the most volatility losing 38 pips in the overnight session before recovering this morning and settling around the 121.75 level.

10 years ago the Greek economy was the worst performing in Europe and it only managed to stay within the Eurozone after receiving 300 billion euros in foreign aid, which came with strict austerity restrictions. By 2012 the country’s economy had shrunk by a fifth since the 2008 recession had begun and the government had been urged to cut wages, public spending and pensions in return for receiving financial aid from the IMF, ECB and European Union. The IMF’s head at the time, Christine Lagarde, who is now set to become the new president of the ECB, said that Greek nationals were avoiding their duty to pay taxes which had partly led to the country’s debt crisis, and that the Greek government needed to take responsibility over the actions of its taxpayers in order to reduce the country’s budget deficit and achieve a stable economy.

The current conditions have improved slightly as the Greek economy has bounced back from its recessionary period, with GDP growing 1.5% and 1.9% in 2017 and 2018 respectively and IMF forecasts showing a 2.4% growth for 2019. In 2017 Greece was able to resume issuing bonds after a blackout period of 3 years but current yields show that perception about the Greek economy is still very low. Greek bonds have returned 20 per cent in the last year, the highest within the Eurozone, as they are considered to be illiquid junk-rated bonds.

Campaign promise: what to expect

Kyriakos Mitsotakis’s New Democracy party has focused its campaign on making Greece more business-friendly, hoping for prosperity to come from economic development. His main pledges are to cut taxes, specifically those in place to cover last year’s bailout, and to restructure Greece’s bureaucracy allowing for privatisation and foreign investment. He expects his government to close a painful bailout-era and lead the Greek population to a future of prosperity and growth.

In good news for the European Union, Kyriakos Mitsotakis is considered to be a firm supporter of the European bloc and believes that further integration is needed. In a time when populist governments have been flourishing increasing the risks to the stability of the Eurozone, the surge of a Euro-backing government is always welcome. But as Greece has been the country that has most heavily relied on Europe’s support over the last 10 years, one would assume that the country would appreciate the favourable terms it has received when borrowing more funds than it has been able to make in revenue through its lacklustre taxing system. The main concern is how the Eurozone’s leading economies feel about the need to continuously rescue those countries that get trapped in a recessionary cycle, and further integration is unlikely to be welcomed by them.