Check out our Fundamental and Technical Q3 forecast guide for GBPUSD

GBP remains on defensive across the board with GBPUSD hovering around session lows, while EURGBP continues to edge higher as UK services PMI dropped to 50.2, missing expectations of 51. Consequently, the composite figure fell into contractionary territory at 49.7, which marked the lowest reading since the immediate aftermath of the Brexit referendum. In turn, IHS Markit stated that the combined PMI surveys indicate that Q2 growth could show a contraction of 0.1%. As such, this is likely to confirm BoE Governor Carney’s recent comments that Q2 growth is set to be considerably weaker. Thus, the outlook for the Pound remains tilted on the downside, particularly with the Bank of England providing a more cautious outlook. Of note, the next GDP release is scheduled for July 10th, however, keep in mind that this is a monthly reading for May.

As political and economic risks keep the Pound on the backfoot, the trendline stemming from the Sterling October 2016 flash has continued to support the currency. However, with downside pressures continuing to mount, eyes are on for a break below, which could exacerbate further losses in the pair with a move towards the 1.25 handle possible, before the YTD low (1.2435) 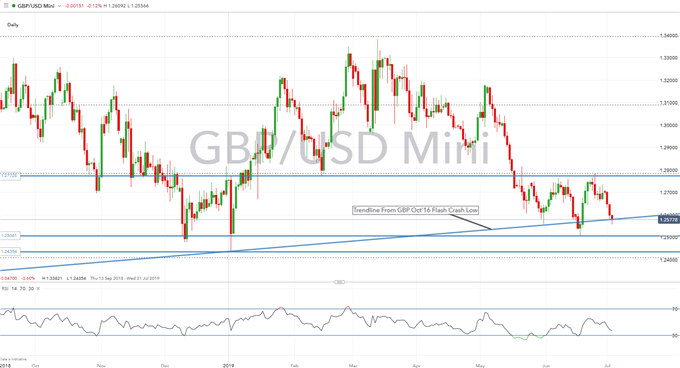 What Does Positioning Tell us About the Direction in GBPUSD?