The S&P 500 staged an incredible opening gap following Fed Chairman Powell’s willingness to cut rates in the near-term. Trading 0.8% higher than it closed Wednesday, the upward jump was the largest for the Index since January 4 when it opened 1.1% higher. As the session progressed, early gains were forfeited, and the Index filled the gap it formed hours earlier. 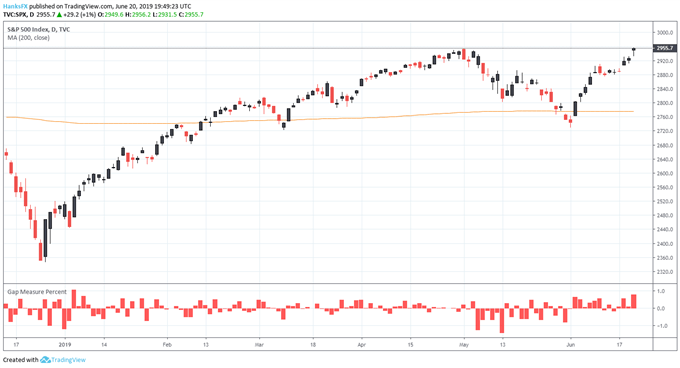 While the retracement may not appear encouraging at first, the removal of a gap of that magnitude is constructive for the Index moving forward and could reduce the potential for cratering when the S&P 500 inevitably faces turbulence in the future. Despite the mid-day mishap, the Index sauntered into Thursday’s close 1% higher than it ended Wednesday. The closing level of 2,955.6 marks a record close for the S&P 500. 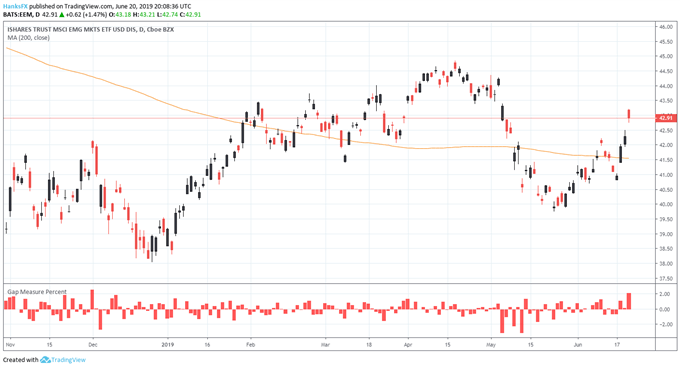 With the capitulation of the Federal Reserve and the resulting extension of easy-money monetary policy, risk appetite was robust throughout the stock world. To that end, the emerging markets ETF, EEM, posted its biggest opening gap higher since December 3, 2018. Although waning global growth and trade concerns have exerted persistent downward pressure on EEM, the fund boasts a 9.6% return in the year-to-date. Widespread risk appetite was also exhibited by the surge in the HYG and JNK ETFs. Follow @PeterHanksFX on Twitter for price and fund flow analysis of these investment vehicles. 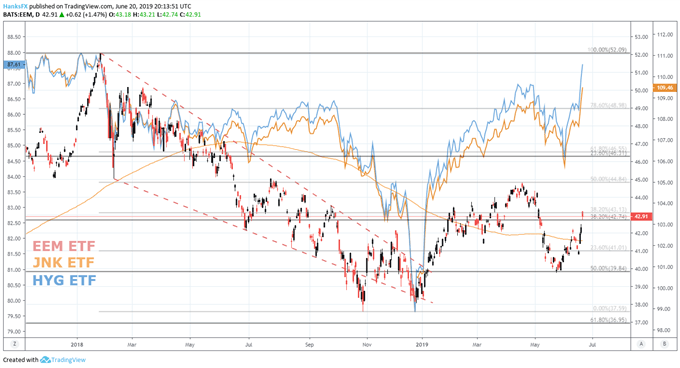 Alongside this newfound risk appetite, Thursday also offered a notable uptick in the VIX Volatility Index. While positive returns in the S&P 500 are typically met with a decline in the VIX, it is not a certainty - as evidenced by Thursday's price action. That said, it is not entirely surprising to see a higher implied volatility moving forward.

For weeks, the market has expected a dovish take from the Federal Reserve. Fed Chairman Powell fulfilled thoseexpectations Wednesday and the S&P 500 quickly tagged record highs. Now that the market’s expectations have played out, investor focus has shifted to the next events on the horizon.

First and foremost, the flare-up intensions with Iran has injected the threat of war onto the world and economic stage. Concern regarding this issue is easily visible in the reaction offered by crude oil prices. 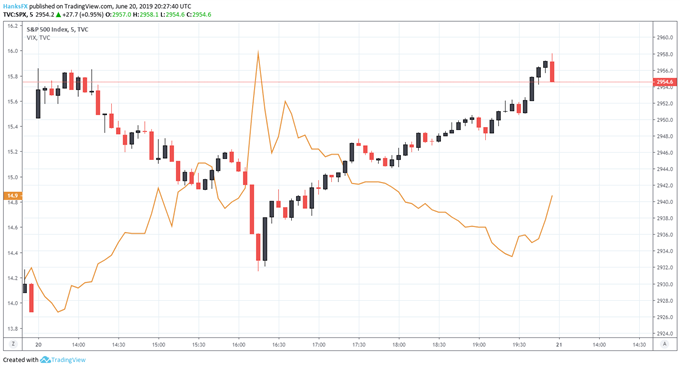 Secondly, next week's Trump-Xi meeting in Japan.As one of, if not the dominant headwind facing global equity markets, next week presents a crucial opportunity for the conflict to be resolved. In the lead up, commentary from either side will sway markets. In months past, a breakthrough has been the best-case scenario and indeed it would be - for long-termglobal growth and geopolitical relations.But for the S&P 500, a resolution could result in turbulence.Given the current economic climate in the United States, Chairman Powell said on Wednesday the central bank is closely monitoringthe impact of trade wars on data and sentiment.

If the US-China bout is suddenly resolved, investorscould expecta surge in regional data regarding manufacturing and exports, as well as an uptick in sentiment. The positiveimpacts from a resolution could be enough to take a rate cut off the table for the Federal Reserve –effectively removing the main catalyst behind June’s equity rally.

While the Fed is unlikely to immediately shift its policy back to the path of hiking rates, it couldexpress a renewed willingness to exercise patience in its implementation of monetary policy tools. That alone would weigh on investor expectations. Thus, it is understandable why the implied volatility of the S&P 500 is heightened amid a strong rally in the underlying index. For more insight on this theme, sign up for my weekly Equity Webinar on Friday.