Thursday found Asian stocks in the now all-too-familiar position of struggling against a big Wall Street drop overnight. The Dow lost more than 200 points for a second straight day, as investors eyed yield-curve inversion in US Treasury markets. This combination of higher yields on shorter dated paper than longer bonds can be a harbinger of recession.

Of course, US-China trade is never far away from the spotlight these days. Sure enough China appeared to raise the rhetorical temperature a few degrees with an editorial in the official People’s Daily. It apparently sought to counselling the US with ‘don’t say we didn’t warn you’ of China’s resolve to defend its interests.

Given all that, and some weaker local data in the form of underwhelming Australian capital spending and building approval data, a lacklustre tone for stock markets was all-too predictable.

The Nikkei 225 was down by 0.7% in the middle of the Tokyo afternoon, with news that MUFG bank had become the second Japanese name to get Chinese bond and stock market access under the Renminbi Foreign Investor scheme not enough to lift the mood.

The Tokyo blue-chip benchmark remains very much within the sharp downtrend which followed this year’s impressive ascent to the peaks of March. 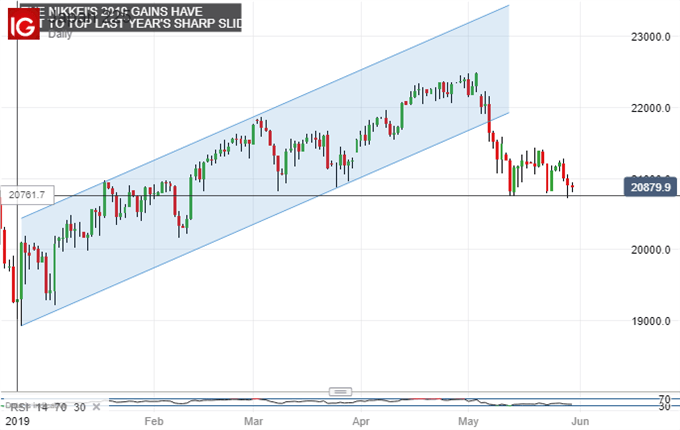 The former significant lows made in mid-May have so far continued to contain the bears but they are coming into close view once again and their ability to survive another trial will surely be tested if US and China continue to joust over trade.

Most other mainboards were lower, with all sectors pressured within Sydney’s ASX 200. South Korea’s Kospi was the only notable exception with buying of tech names like Samsung Technology and SK Hynix sufficient to offset some regional gloom.

The US Dollar benefitted from a considerable haven bid against most major rivals despite the slide in ten-year US yields. The greenback gained some ground against that other customary haven the Japanese Yen but the period of Yen bullishness which has lasted since late April looks far from over technically speaking.