US President Donald Trump is in the country on a four-day state visit at which he said on Monday that he hopes to announce a trade deal soon. There remains no sign of any rapprochement with China, where Beijing has rebuffed US demands that the state-run system be reformed, but investors clearly chose to focus on Japan. With there apparently no sign whatever of the China deal many had hoped for by the end of this month, it may be that they are looking for crumbs of comfort elsewhere.

The Nikkei 225 added 0.5% as its afternoon wound down. Semiconductor player Tokyo Electron made big gains after announcing a share buyback. Shanghai’s mainboard added 0.9% with Australia’s ASX 200 up by 0.5%.

Regional foreign exchange markets felt the lack of both New York and London Monday for holiday breaks. The Euro lost some of the composure it had hitherto retained as investors looked to the results of European Parliamentary elections and the inevitable increasing fragmentation they will bring. The US Dollar traded narrow ranges against its other major traded rivals.

Heightened risk aversion can make foreign exchange markets something of a ‘haven battle’ between the Japanese Yen and its US counterpart, and that trend has been seen often this year. 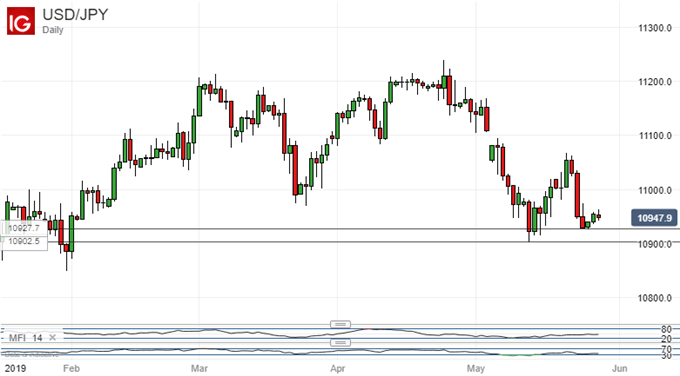 The Yen has had the better of the contest in recent weeks, with USD/JPY sliding to lows now seen since February. However, the bears seem to have been driven off for the moment, with the pair apparently building a base above May’s lows.

The rest of Tuesday’s session offers plenty of scheduled economic data points, with consumer confidence indicators from Germany and, more importantly, the US, likely to garner most attention.