The Australian Dollar market was probably too focused on overall risk appetite Tuesday to worry overmuch about what turned out to be another gloomy business confidence survey from its homeland. The wait for this week’s main local event probably blunted its impact too. Official employment data will come out on Thursday, and the Reserve Bank of Australia has made it clear that it is focusing on these numbers intently when setting monetary policy.

Still, April’s Business Confidence indicator from major local lender National Australia Bank came in at zero, with the March figure revised down to -1 from a former reading which had also been zero. The assessment of Current Conditions limped over the line at 3, down from 7 last month.

Of course, US-China trade tensions have reached an even lower pitch in May, and without any sign of resolution here Australian confidence may only have further to fall. However, the AUD/USD rate didn’t move much on the data either way. 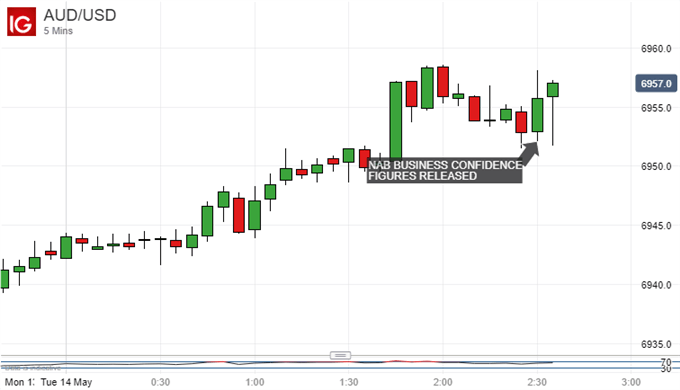 The Reserve Bank of Australia surprised the markets last week by declining to cut the key Official Cash Rate from the 1.50% record low which has endured for nearly three years. In doing so it flagged up its focus on the labor market, which has been arguably the most consistent bright spot in the economic data calendar. Unemployment has declined consistently since 2015 and participation in the labor market remains at record highs.

The problem for the RBA is that none of this has been desperately inflationary, with consumer prices rising at a rate far below the central bank’s 2-3% target. It still seems to think that continued employment gains could see prices rise, but the markets don’t seem to agree.

Interest rate futures markets still price in two quarter point cuts to the OCR over the next eighteen months, much as they did before the RBA pronounced last week. April is expected to see a rise of 15,000 jobs, for an unchanged unemployment of 5%. That would probably be regarded as yet another strong showing, and the extent to which it supports the Aussie, or affects interest rate prognoses will be fascinating.

However, weaker business confidence hardly augurs well for continued strong employment growth. Firms worried about the future do not tend to hire. At present, rate futures markets fully price in a cut by August, but a move at the next RBA policy meeting in June is not thought likely.

AUD/USD remains under quite severe pressure with its current level well below the downtrend line which has dominated trade since early 2018. 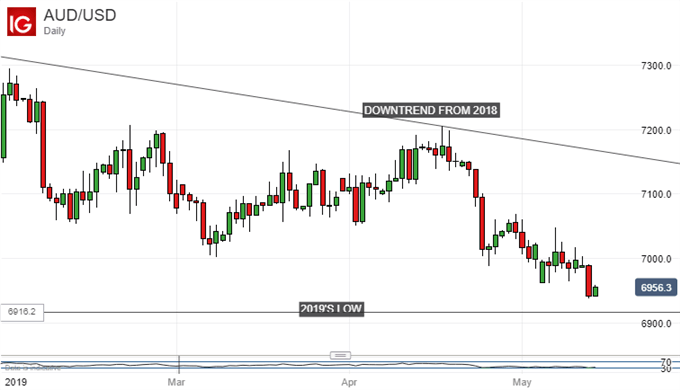 The next clear downside target is this year’s lows, which were made in January.