Crowd-pleasing results from global banking titan HSBC, which is listed in Hong Kong, New York and London, failed to lift the spirits of an Asian equity session which was becalmed by the outage of Japanese and mainland Chinese markets for holiday.

HSBC’s profit rose 31% in the year’s first quarter, well ahead of expectations, boosted by a big rise in its core Asian business and some successful cost cutting. Profit before tax at the largest European-based bank rose to $6.2 billion from 4.76 billion in the same quarter last year, HSBC said in a stock exchange filing. Analyst expectations had centered on a $5.58 billion turnout.

The result might spread more cheer in Europe, where more markets will be open, but it had little impact in Asia. The Hang Seng was flat, with Australia’s ASX up 0.2%.

The latter may have been boosted by expectations that the Reserve Bank of Australia could cut its record-low interest rates next week after a long hiatus. On Friday Australian building approval data came in markedly weakly, the latest in a string of lackluster economic numbers. At present rate futures markets put the chance of a cut at 44%, below 50% clearly but far higher than at this time before any recent policy meeting.

AUD/USD has now faded back to the lows of early January. 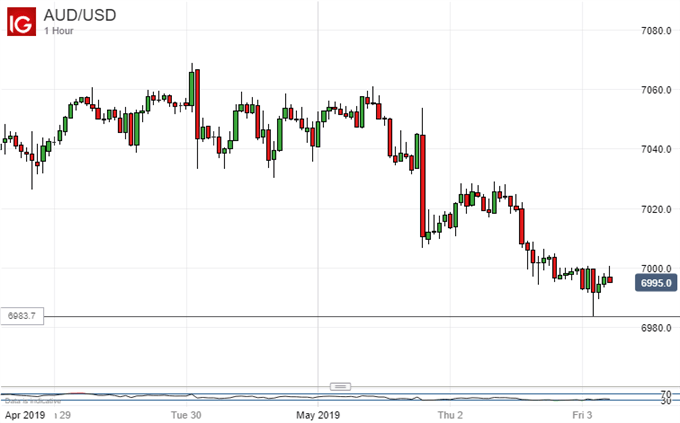 The Aussie is clearly still under some duress but further decisive moves may well await the RBA’s decision. It will come on Tuesday.

Currency markets elsewhere were broadly steady before the release of official US labor market statistics. Still arguably the most important single data point for global markets out of the monthly round, they will be released later. Nonfarm payrolls are expected to have increased by a probably-comforting 190,000 in April, for an unchanged unemployment rate of 3.8%. As-expected data could give Asia Pacific stocks a lift as next week gets under way, but this may be tempered by worries that US interest rates may yet rise further given the strength of the world’s largest economy overall.

Clearly market focus is going to be firmly on those US payroll numbers but they’re by no mains alone on the data slate. Consumer Price Index releases from Switzerland and the Eurozone are also due, as are service sector Purchasing Mangers Indexes from the US and UK. The US version of the latter from the Institute for Supply Management is coming up as well.