The Bank of England will release its latest monetary policy decision at 1200BST, where the central bank is expected to maintain interest rates at 0.75% with a 9:0 vote split. OIS markets attach a 98% chance that the BoE will stand pat. As such, focus will be on the accompanying statement and quarterly inflation report. In terms, of future rate decisions, money markets only assign a 40% chance that the BoE will raise rates later this year, given that the central bank remains hand tied by the continued Brexit uncertainty. 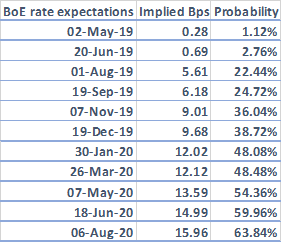 The UK economy has been growing at a relatively stable pace throughout Q1 with risks tilted to the upside of the BoE’s February QIR assumption of 0.2%, given that February and January saw monthly GDP gains of 0.2% and 0.5% respectively. In turn, this raises the likelihood that the BoE could upgrade its growth forecasts in the QIR report.

On the inflation front, while prices have dipped below the BoE’s 2% target to 1.9%, the gains in the energy complex is likely to keep inflation supported. Alongside this, the BoE will also find comfort in the fact that the labour market remains strong and with wage growth at decade highs of 3.5%, which in turn keeps underlying inflation pressures firm.

However, PMI survey’s have been less encouraging for the BoE with both the services and construction PMI figures hovering in contractionary territory, while the manufacturing PMI has been held up by the record amounts of stockpiling.

Potential for a Hawkish Dissenter?

Since the prior meeting, BoE commentary over monetary policy has been muted with rate setters’ hands seemingly tied by the uncertainty over Brexit and with an A50 extension till October 31st, odds for a rate hike in 2019 have been reduced. However, an article in UK press had noted that there could be a hawkish dissenter (Most likely Saunders) at the meeting, despite the uncertainty that Brexit poses, given that inflation risks are tilted to the upside amid record low unemployment and rising wages to accompany to the rise in oil prices.

Despite articles in the UK press, consensus is for a 9:0 vote to keep rates on hold. As such, focus will be on the accompanying statement and quarterly inflation report. It is likely that the BoE will continue to suggest that gradual and limited rate hikes will be needed in a smooth Brexit scenario. That said, given the robust economic data (aside from PMI figures) the central bank could be somewhat optimistic over the economic outlook, leading to an upgrade to near-term growth forecasts, supporting the Pound. Alongside this, GBPUSD may see a notable bid, provided there is a hawkish dissenter, which could see the BoE signal that a rate hike could come sooner than what the markets currently expect.