While the surge in crude oil prices after the US ended sanction wavers in Iranian oil took center stage, another asset may soon be in the spotlight: the Euro. The divergence in US and EU foreign policy toward Iran may add another crack to an already-fractured relationship. This comes as policymakers from both sides of the Atlantic prepare to re-enter what appears to be another trade war.

In 2018, President Donald Trump shredded the 2015 nuclear deal with Iran and reimposed sanctions against Tehran. The EU, however, wanted to preserve the previous agreement as a way to maintain regional stability. European policymakers subsequently created an economic program that allowed the EU to circumvent US sanctions and facilitate trade with Iran as a way to incentivize Tehran to continue with the original agreement.

If the EU pursues its original plan as a way to mitigate Iran’s economic crisis, it could lead to the US imposing sanctions against the EU. The result would almost certainly involve retaliation and could lead to a trans-Atlantic trade war. This would be occurring right as the US approaches what appears to be the end of an economic conflict with China, one of the biggest weights dragging global growth according to the IMF and the WTO.

The discontinuation of Iranian oil-importing waivers adds an additional complication to US-Japan relations too. Prime Minister Shinzo Abe will be holding a summit with Trump on Friday as the White Houses continues its campaign to redesign 21st century global trade relations. Japan may find itself scrambling to find new sources of foreign oil and this could lead to less-than-optimal backdrop for negotiations.

A deterioration in US-EU/Japan trade relations would likely not only affect the Euro but weigh on sentiment-linked currencies like the New Zealand and Australian Dollars. Growth in Europe and the US has been increasingly underperforming relative to economists’ expectations and global PMI’s have been showing worrisome weakness. Monitoring political risk therefore becomes exponentially more crucial because of the inherently embedded market reactions it elicits. 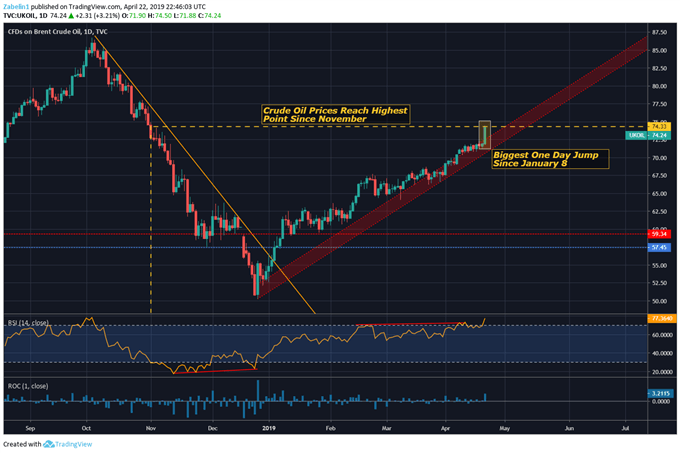