The reaction of the pound to jobs data has served to reinforce the continued concerns over Brexit as the numbers are released 10 minutes before schedule. The Pound had a very short rebound against both the Dollar and the Euro as figures beat expectations, but both pairs re-adjusted quickly as Brexit hopes have taken another hit.

Job creation has boomed at the beginning of 2019, as the change in employment has increased to 220k, up from 167k in the month of December and beating expectations of just 120k. On the other hand, average weekly earnings remained stable at 3.4%. UK inflation remained is currently 1.8%, leaving the average worker’s pay increasing to 1.6% in real terms.

Unemployment continued to fall to 3.9%, its lowest level since 1974. This means that UK businesses are hiring more staff rather than increasing investment and capital spending as employment decisions are quicker and easier to make ahead of the uncertainty around Brexit.

The Bank of England is expected to keep rates unchanged when they meet on Thursday as they prefer to push back meaningful rate hikes until some of the Brexit uncertainty has cleared. Lower rates boost real spending in the economy, which will in turn increase earnings and inflation leading to an increase in economic output.

What now for Brexit?

The hope for Brexiteers have again taken a hit as Parliamentary Speaker John Bercow ruled out Theresa May being able to bring her agreement to Parliament for a third vote unless it has “substantial changes”. With just 10 days to go until the UK is due to leave the EU, ministers have warned there is a “constitutional crisis” as Theresa May will now have to attend Thursday’s EU summit without a plan in place for the future of her deal, meaning she will most likely have to ask the EU to grant the UK an extension longer than the original 3 months planned.

The pound saw a 2% rally against the dollar at the end of last week as MPs rejected leaving the EU with no deal in place signalling that investors perceive a hard Brexit as a bad outcome for the British Economy. The pound has seen little change in the last 12 hours as the announcement of a third vote been blocked pushes the UK towards a longer extension than originally planned. The fact that there has been no bearish pressure after the announcement means that investors perceive a longer extension to be better for the pound as there are currently no alternative to Theresa Nay’s failed exit plan. 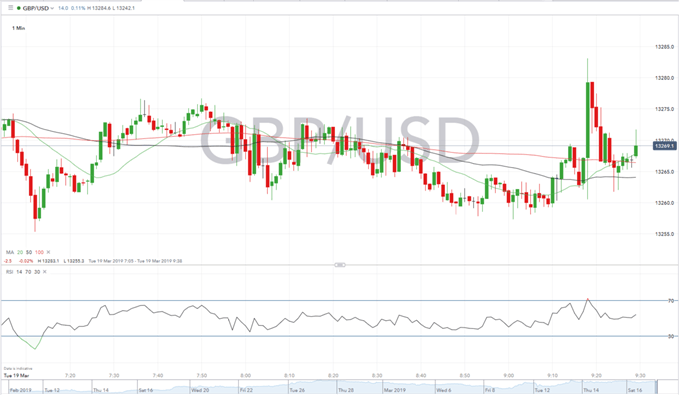 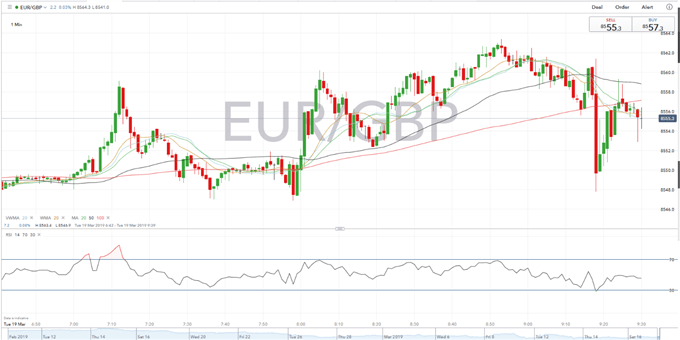 IG Client Sentiment – shows retail are 48.7% net-long GBPUSD, a bearish contrarian indicator. However, daily and weekly changes give us a mixed trading bias.