The Australian Dollar wilted noticeably Wednesday in the aftermath of wage data which on the face of it were exactly as expected.

Fourth quarter wages for 2018 expanded by 2.3% annualized, exactly as expected and the same as the previous three-month period. On the quarter they were up by 0.5%, just below the 0.6% expected.

AUD/USD’s skid after the numbers suggests that the bar for Australian data to impress might now be quite high in light of the Reserve Bank of Australia’s admission this month that record-low interest rates could yet fall further.

Sluggish wage growth clearly has a pass-through effect into consumption and inflation. The latter remains stubbornly weak and, on the thesis that current wage levels won’t move the dial on that at all, the Aussie’s reaction is explicable. 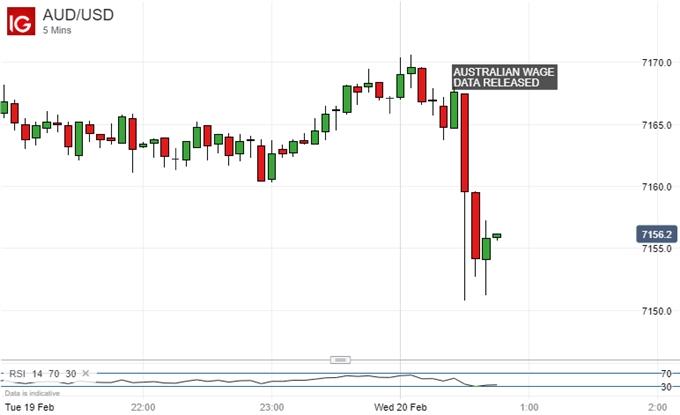 The impact may not last long, however. The Australian Dollar remains in thrall to overall risk appetite in the market, which is in turn driven often by headlines on trade talks between China and the US- a game in which the Australian economy has as much skin as any third-party.

Friday will so bring Parliamentary testimony from RBA Governor Philip Lowe. This could pose some risk to Aussie Dollar bulls, especially if he chooses to reiterate the price-boosting benefits of a weaker currency. He may well.