Thursday’s Asia Pacific trading session saw a divergence between foreign exchange markets and stocks. Generally, most benchmark stock indexes traded higher excluding the Nikkei 225. Although there were a couple of moments when most fell in tandem. Investors may be wary of the uncertainties facing global growth ahead such as US China trade negotiations and a partial government shutdown in the United States.

Japan’s Nikkei 225 traded about 0.16% lower heading into the close. The index may be on the verge of a bearish reversal in the near future. Meanwhile China’s Shanghai Composite and South Korea’s KOSPI climbed roughly 0.50%. Australia’s ASX 200 rose about 0.38%, though local front-end government bond yields aimed lower.

This may have been due to actions from the National Bank of Australia (NAB) to raise rates on variable home loans. For the RBA, this could lessen the urgency to hike in the near-term and this may have been why the Australian Dollar relinquished all of its gains earlier on a rosy domestic jobs report. The pro-risk New Zealand Dollar also declined as the US Dollar saw some strength.

While most Asia stocks traded higher, S&P 500 futures are pointing lower hinting that market mood may turn sour during the US and European trading sessions. The ECB monetary policy announcement is due to cross the wires. Given that President Mario Draghi has highlighted the need for a significant amount of stimulus still, we may see that tone echoed in the statement later today.

This may weaken the Euro and boost the US Dollar, sending it higher against its Australian and New Zealand counterparts. But, declines in AUD/USD and NZD/USD could be somewhat mitigated if stocks rally on a more cautious ECB.

Since highlighting the inverse head and shoulders bullish reversal pattern in the ASX 200, prices rose about 1.5%. But, a warning sign has emerged that its next leg could be lower. This is an evening star that formed at its most recent peak just under resistance at 5,942 (the target of the inverse head and shoulders). Prices are now attempting to push higher and more closes to the upside may invalidate the evening star. Near-term support is at 5,795 which is the February 2018 low. 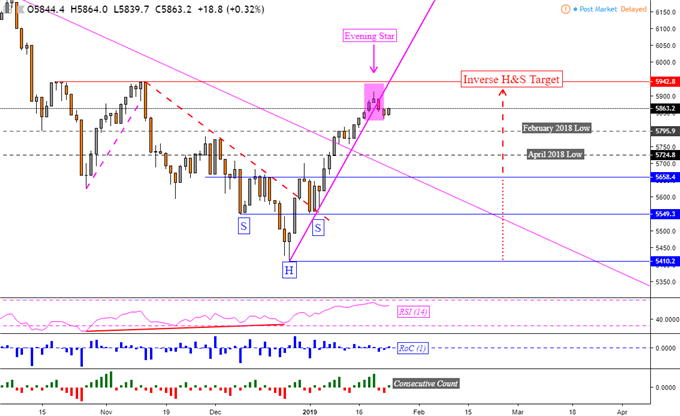