See how our Q 2019 Trading Forecast for GBP can help you when trading.

Sterling – Off its Best Levels but Still Retains a Positive Bias

GBPUSD continues to trade around 1.2875 ahead of PM May presenting her updated Brexit bill – Plan B – to Parliament later in the session. While there are unlikely to be any major alterations – PM May is expected to go back to the EU and ask for concessions, again – the current market sentiment remains positive, based on the feeling that a No Deal Brexit is becoming increasingly unlikely. The bill, and amendments, will be debated this week ahead of a vote on January 29.

UK jobs and wages data, released on Tuesday at 09:30 GMT, is likely to show the UK consumer better off as wages continue to out-strip inflation. While the BoE remains on hold until Brexit is finalized, stronger wage growth may tip the central bank’s thinking towards tighter monetary policy.

In the Eurozone, German ZEW data on Tuesday, the ECB meeting on Thursday and German Ifo data on Friday should all be closely watched.

Retail traders remain long of GBPUSD – 58.0% - according to the IG Retail Sentiment Indicator. See what this means and how it can help you make better informed trading decisions. 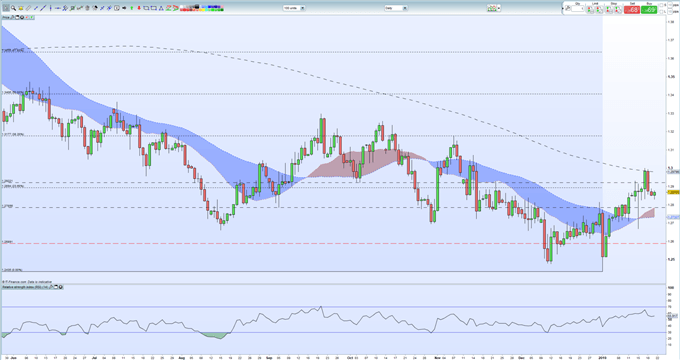