The Australian Dollar slipped Thursday despite some weaker Chinese inflation data which ought perhaps to have lent it some support.

December’s official Consumer Price Index for December came in with an annualized rise of 1.9%. This was below both the 2.1% expected and November’s 2.2% print. It was also the lowest rate of expansion since June 2018 and should argue at least somewhat against any removal of economic stimulus on the part of the authorities in Beijng.

Factory gate prices capture the imagination of markets somewhat less, as they have a weaker link to monetary policy. Still, the Producer Price Index alkso missed forecasts, rising 0.9% for the smalles increase since mid-2016.

The Australian Dollar often finds itself cast as foreign exchange’s preferred Chinese economic proxy thanks to the vast, close trade links between the two countries. Of late that relationship has tended to hold good when Chinese data disappoint, as they quite often have, rather than when they meet forecasts.

Still, AUD/USD was already wilting before this release. It continued to do so as markets mulled the numbers. 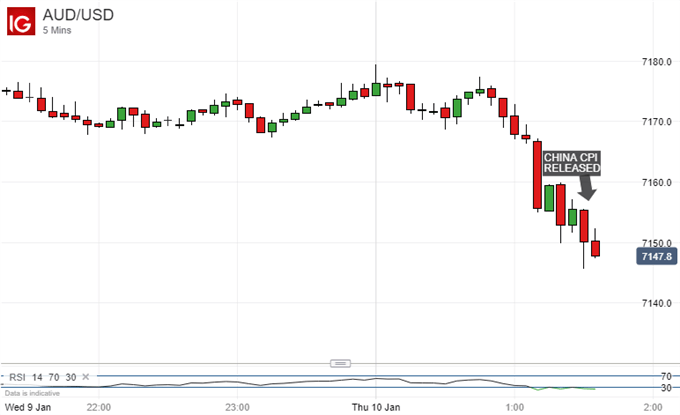 On its daily chart the Australian Dollar has in recent days risen back above the downward channel against the US Dollar which marked trade for much of 2018. AUD/USD sunk almost inexorably through the year as US interest rates rose, while Australia’s key Official Cash Rate remained stuck at the 1.50% record low. That has been in place since August 2016. 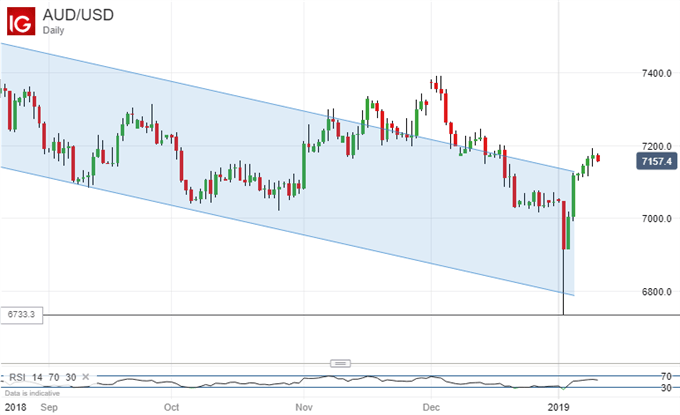 Still, at some point interest rate differentials will return to the driving seat and here the Australian currency has a problem. Not only are rates historically low, but rate-futures markets suggest that they could yet go lower still.

At present the Reserve Bank of Australia believes that the next move, when it eventually comes, is more likely to be a rise.

Either this prognosis is wrong, or the market is.