Sterling – Back to Brexit Watching

The recent quiet in the Sterling space is expected to be broken this week as Brexit negotiations return with a band ahead of Parliament’s vote next Tuesday’s vote on PM Theresa May’s deal. The vote, postponed from the end of last year, is currently expected not to pass, leaving the UK lurching towards a No Deal exit from the EU at the end of March.In a recent interview, the PM warned that the UK would face ‘unchartered territory’ if her bill failed and that the UK’s exit at the end of March would be ‘in danger’. The PM is expected to ramp up No Deal warnings this week in an attempt to steer MPs towards voting for her bill, although other sources say that a No Deal exit from the EU is gaining popularity among some MPs.

These warnings from the Prime Minister – and counter-claims from Brexiteers - are likely to buffet the British Pound this week, leaving trading difficult and volatile. Sterling has remained reasonably firm against a wide range of currencies over the last couple of weeks and this mild bullishness may now come under pressure as Brexit headlines re-appear. The recent GBPUSD dip to 1.2435 was caused by a short-lived burst of US dollar strength and this level may hold as the multi-month low ahead of next week’s vote. Below here, the March 2017 low print of 1.2109 should hold firm if tested. 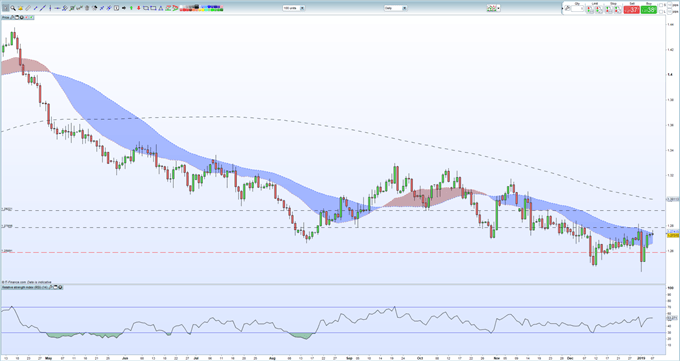 IG Client Retail data confirms a negative picture for the GBPUSD. Retail are 62.1% net-long the pair, a bearish contrarian indicator. However, recent daily and weekly positional changes suggest that the pair may move higher.