Asian Stocks Mostly Down On Apple Woes, US Futures In Wary Focus

Asia Pacific stocks were broadly weaker again on Thursday, with the travails of Apple very much in focus. The US tech titan said Wednesday that it foresaw weaker sales in China as it cut guidance for the first quarter of 2019.

Apple blamed lower-than-expected iPhone revenue and worries about a slowdown in the world’s second largest economy. These worries were already simmering thanks to a clearly weaker run of Chinese economic data. Of course, the region is home to a number of Apple suppliers, which made the going tough for stocks, as did falls for US equity futures.

Japanese markets remained closed for a holiday, but the Shanghai Composite shed 0.1% as their close approached, while the Hang Seng was down 0.4%. Australia’s ASX 200 bucked the trend and rose by more than 1% as its energy sector caught a nice tailwind from higher oil prices in the previous session even though they failed to hold into Thursday’s trade.

The Japanese Yen climbed sharply against its peers following Apple’s announcement, which came just as the US market had bowed out and before Asian desks were fully operative. Market liquidity is famously thin during these hours, and moves can be magnified. The spike in risk aversion reportedly caused huge stop-loss buy orders from accounts which had been short of the Yen. The US Dollar hit its lowest point against the Japanese unit since March, 2018, while the risk-linked Australian Dollar fell to lows not seen since 2009 against the greenback.

Technically speaking AUD/USD has now traded outside its dominant 2018 downtrend channel on an intraday basis, but remains well within it. 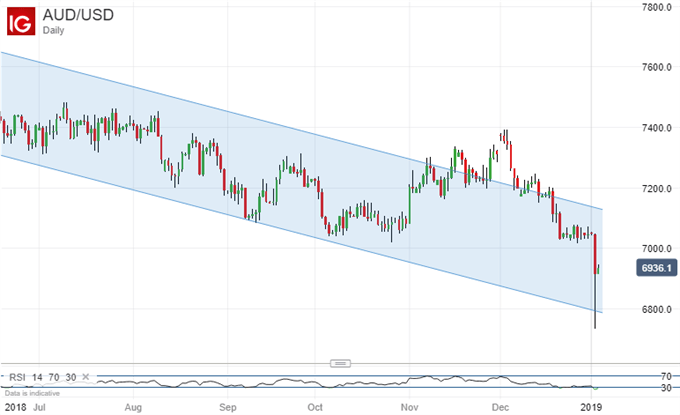 With absolutely no sign of any interest rate support coming the Aussie’s way this year, and possibly into next, the currency is all-too-likely to remain under duress even if perceptions of likely US rate rises are reined in further.

Topping a still-limited data bill we find the US manufacturing and employment snapshot from the Institute for Supply Management. Automated Data Processing’s look at the labor market is also coming up, as are weekly jobless claims numbers. Switzerland’s manufacturing Purchasing Managers Index is on the slate too.