Asian stocks were broadly higher Wednesday, despite plentiful looming worries, as reports that China would reduce retaliatory tariffs on US auto imports boosted car makers across the region, notably in South Korea and Japan.

Europe remains the clearest source of potential volatility though. French President Emmanuel Macron has offered concessions in the face of civil unrest but increased spending by Paris may well make budgetary discipline harder to enforce in restive Italy. The British government postponed Tuesday’s vote on the Brexit deal, which still looks very unlikely to pass in anything like its current form. Still, Asia Pacific investors were clearly minded to accentuate the positive from that auto-tariff story. The Nikkei 225 added 2.1%, with the Hang Seng, Kospi and ASX 200 all up by more than 1% as their closes approached. Shanghai was a little more subdued, having risen by just 0.2%.

The Australian benchmark has traded out of what looks like an important support zone. 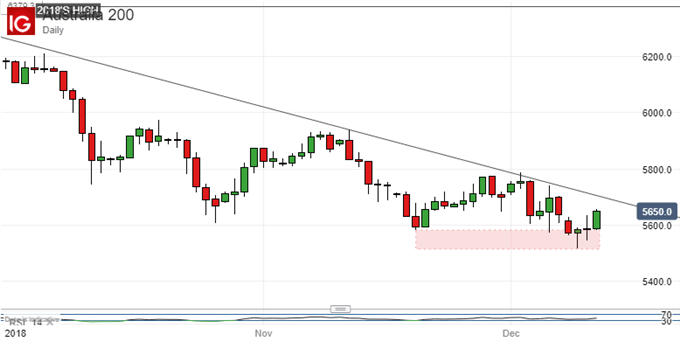 However its dominant daily-chart downtrend remains very much in place and will force another support test shortly if it continues to do so.

The US Dollar held near one-month highs against a basket of its major traded peers. The greenback was boosted by a rebound in US yields and also by ongoing stark weakness in that Brexit-battered UK Pound.

The Euro was focused on this week’s European Council meeting which clearly won’t be short of matters to discuss.

Gold prices were firm on still-easing expectations about US monetary policy, while crude oil prices were boosted by OPEC-led production cuts announced last week and by brighter hopes for US/China trade talks.

Still left on Wednesday’s economic data slate are those crucial US Consumer Price Index numbers for November. A modest increase in the ex-food-and-energy CPI to 2.2% on the year (from 2.1%) is expected. On-target data should see the markets continue to believe that US rates will rise this month, but there is and will remain much debate as to how many more rises 2019 might see.

Eurozone industrial production numbers are coming up too, as is news of US mortgage applications. Crude oil inventory stats from the key Cushing, Oklahoma, delivery node are also due. DailyFX Senior Currency Strategist Ilya Spivak suspects that the day’s key US economic data may pull oil prices in opposing directions.