Brexit Latest: Rumors and Delays Press Down on Sterling (GBP)

The proposed tv debate between UK PM Theresa May and leader of the opposition Jeremy Corbyn is looking dead in the water after ITV pulled out of hosting the debate, days after the BBC pulled its bid to air the event. The event that was expected to be aired live on Sunday December 9 was an opportunity for both May and Corbyn to put forward their views and plans on Brexit just two days before the vote in the House of Commons.

And this vote may now be in doubt after senior Conservative members want the vote postponed allowing more time to be dedicated to the contentious backstop proposal. PM May is expected to lose the vote heavily on Tuesday and a delay would also allow her more time to shore up votes. The chairmen of the influential Conservative group, the 1922 Committee, said that getting clarity about how the UK could remove the backstop was more important than the timing of the vote. PM May has said that the vote will go ahead as planned.

GBPUSD continues to trade sideways and remains vulnerable to further losses as the debate about the vote continues. The pair may find some solace from today’s US jobs report at 13:30 GMT where the headline figure is expected lower than last month. The US dollar has come under pressure in the last few days with the market now pairing back the timing and the amount of US interest rate hikes in 2019. Recent US Treasury yield curve inversion has prompted fears of a recession in mid-2020 in the US, tempering previous rate hike expectations. 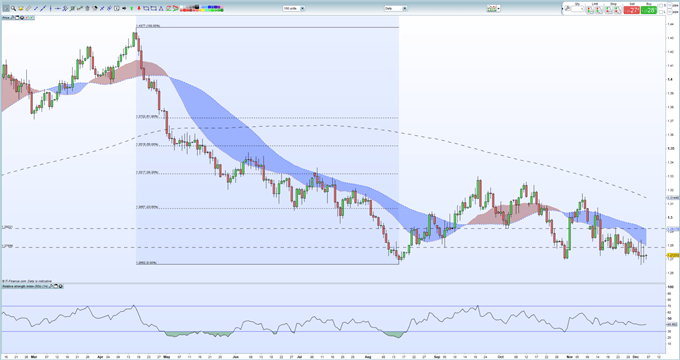 Retail traders are 63.1% net-long GBPUSD, according to the latest IC Client Sentiment Data, a bearish contrarian indicator. However, recent changes in daily and weekly positions suggest the pair may move higher despite the fact that traders are net-long.