Crude oil prices gapped over 3 percent higher at the start of the Asia trading session following a rally in APAC equities. This occurred after news of a temporary cease fire on trade wars had been reached between President Donald Trump and Chinese President Xi Jinping. Furthermore, during the G20 Leaders’ Summit, both Russia and Saudi Arabia agreed to cut oil production in 2019. This is as opposed to original plans from President Vladimir Putin. 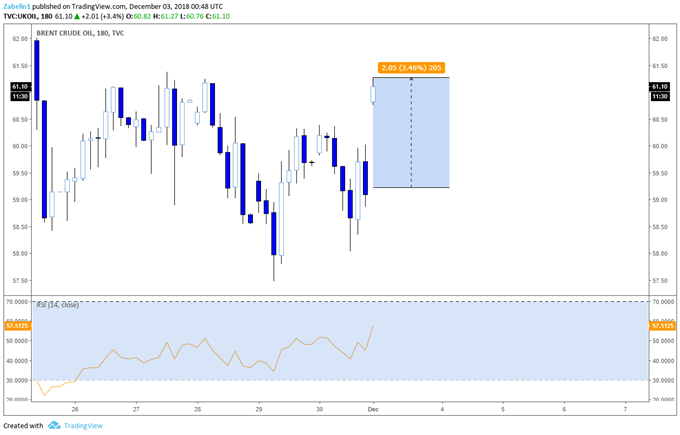 Markets are now eyeing the OPEC meeting with Russia and other major petroleum exporters on December 6 in Vienna to discuss exact production cuts next year. This comes after crude oil hit a four-year high at $86 a barrel and then suffered a 33 percent loss, hitting a low at 57.3 in later November.

The decline in oil prices has been a boon for emerging markets that have been battered down by the trade wars and a hawkish Fed. It is difficult to say how emerging markets will react despite the economic ceasefire between Beijing and Washington and the plan to cut oil production.

Crude oil and other cycle-sensitive assets are likely to experience higher volatility as the meeting approaches and markets become more tense. The Norwegian Krone and benchmark OBX rallied on the news of the prospective oil cuts. As a major petroleum exporter that has suffered the decline in oil prices, the news came as a boon to the local equity markets and the currency.