Sterling on the Sidelines as PM May Battles Rebels

Going into the end of November - and the weekend G20 meeting - Sterling remains stuck in a range with mildly supportive month-end flows providing some aid. And support is something that PM May is lacking with one report in the media saying that up to 100 Conservative MPs will vote against the PM’s Brexit deal, leaving it a complete non-starter. The Prime Minister still has time to convince her MPs, but this is becoming even more unlikely after news broke yesterday that PM May has ruled out a Norway-style deal as a back-up plan if the government lose the vote in the House of Commons. PM May and the leader of the Opposition Jeremy Corbyn will have a televised one-hour Brexit debate on Sunday December 9, just two days before the vote in Parliament. If PM May’s proposal is rejected, the Brexit negotiations may take another turn for the worse, impacting the value of Sterling.

GBPUSD trades around 1.2800, stuck in the middle of a 1.2725 – 1.2925 range that has held for the last two weeks, despite the Federal Reserve easing back a touch on the rate hike timeline and expectations, clipping the US dollar’s wings. This market inactivity can be seen by the RSI indicator at the bottom of the chart that has been flat for the last two weeks. 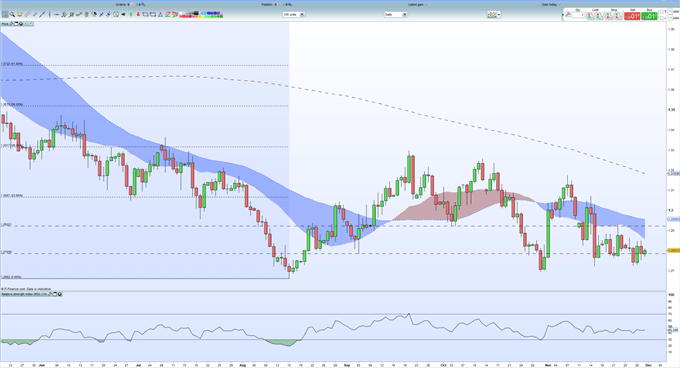 IG Client Retail Sentiment shows that traders are 72.2% net-long GBPUSD - a bearish contrarian signal - and when the latest daily and weekly positional changes are factored in, we get a stronger GBPUSD bearish trading bias.