Sterling (GBP) Week Ahead: Brexit Battle Has Only Just Started for PM May

We have just released our Brand New Q4 Trading Forecasts for GBP.

IG Client Sentiment shows that retail traders are 71.5% net-long of GBPUSD – a bearish contrarian indicator. When daily and weekly positional changes are factored in - the number of traders’ net-long the pair is up 29.2% on the week – we get a stronger bearish contrarian trading bias.

The EU/UK break-up is proving to be a very difficult and ill-natured affair with nothing yet agreed upon and all sides seemingly sticking to their own red lines. The latest update revolves around UK PM Theresa May moving towards the EU, and remaining in the customs union, a direction that is provoking increased domestic hostility. The Prime Minister will continue talks with her counterparts in Europe over the weekend after a draft agreement – a non-binding proposal – was offered and accepted by Brussels. PM May is pushing hard for this draft text to be agreed by the EU 27 leaders on Sunday, but as always seems to be the case during Brexit negotiations, another hurdle has been placed in her way. The Spanish Prime Minister has stated that the future EU/UK relationship should not apply to Gibraltar – a British overseas territory – and unless this relationship is decided bilaterally between Spain and the UK, he will veto this weekend’s deal.

While Spain’s veto will not be able to derail proceedings on it own – the vote is decided by a qualified majority – the EU is likely to use this threat as another point of leverage during discussions.

If, as seems likely, the UK gets a draft agreement, it will have to be passed by the House of Commons and that looks very unlikely with MPs from both sides of the House stating that they will vote the agreement down. If the agreement is not passed it is possible that a ‘meaningful vote’ on alternatives to PM May’s deal will be taken in the House before the end of year, and this could include a second referendum.

In the unlikely event that the government wins the vote, the UK and EU member states will have to come together to negotiate new trading terms (FTAs), a process that is likely to take years and ramp up the hostility further between the sides. The recent Comprehensive Economic and Trade Agreement (CETA) between Canada and the EU took around five years for negotiations to be concluded and nearly another two years to be approved by the European Parliament.

Brexit Effect on Sterling and UK Stocks: Impact of Deal or No Deal.

While these political games play out, Sterling will continue to remain weak and vulnerable to any additional bad news. The British Pound has already got a negative Brexit-premium factored in but if PM May is defeated in the House and resigns, leading to the possibility of a general election, or if a second referendum is called, investors would take flight and Sterling would fall further.

GBPUSD has settled in a 1.2670 – 1.3300 range for the last four-months with intra-day volatility provided by a constant stream of headlines and rumors. In addition, the US dollar is likely to push higher, backed by rising US interest rates as the Federal Reserve continues to tighten monetary policy.

Next week Sterling traders will have a little more clarity as to the current state of negotiations and the Pound may have a short-lived and small rally, but much bigger battles lie ahead. 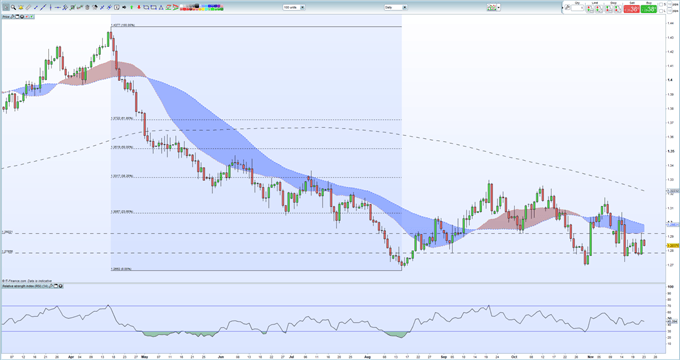