Asian Stocks Wilt Again On Trade Fears, US Durable Goods Up Next

Yet more Wall Street weakness made the going tough for Asia Pacific stocks on Wednesday, with trade worries once again to the fore.

The US said on Tuesday that China has failed to alter what Washington terms the “unfair, unreasonable” practices at the heart of the current trade spat between the two global titans. This finding was part of the US Trade Representative’s investigation into China’s intellectual property practices.

Leading US indexes fell sharply again on Tuesday too, with the so-called FAANG tech giants in bear-market territory (they are Facebook, Amazon, Apple, Netflix and Google parent Alphabet).

Local stocks followed them down, with the Nikkei 225 off 0.3%, the Shanghai Composite and Hang Seng both down by 0.2%. Australia’s ASX 200 shed 0.5%, with retail names under some pressure. Seoul’s Kospi was in the red by a similar amount as its close loomed.

The Nikkei has fallen very sharply from the multi-year highs of early October. 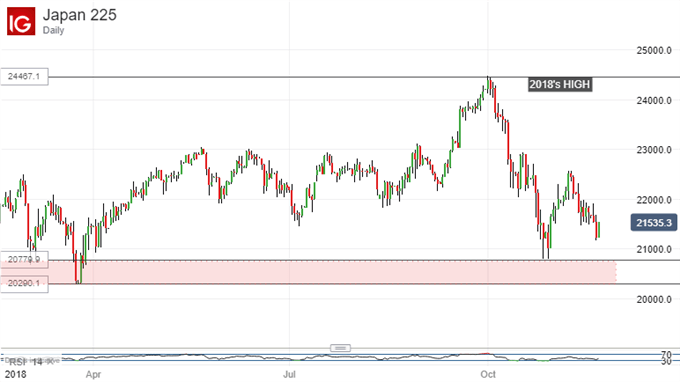 However, it remains for the moment above a key range of daily-chart support between October’s lows and those of March, 2018 which are also the lows for the year. Unless the bulls can hold the market at the former, the latter may well come quickly into focus for the broader market.

With those trade and growth worries in prospect, it should be no surprise that perceived haven currencies rose in Wednesday’s trade. The US Dollar seemed to get the best of it, edging higher against its major traded rivals. USD/JPY rose once again, with the bout of Yen strength seen earlier this month petering out a little. While both currencies have the apparently requisite haven stats, the greenback continues to offer considerable yield advantage over its Japanese peer.

Gold prices crept lower, not an uncommon sight as the Dollar gains. Crude oil prices recovered somewhat from their recent slump but the market remains very skittish as investors try to form a view about likely medium-term demand.

Still awaiting investors on Wednesday’s schedule are the economic outlook from the Organization for Economic Cooperation and Development, UK public spending figures and the University of Michigan’s sentiment snapshot. However all these are likely to be mere bit players to the main event- October’s US durable goods order numbers. Jobless claim data and crude oil inventory figures are due too.