The Japanese Yen has made some ground against the US Dollar in the last couple of weeks, but USD/JPY’s dominant uptrend looks safe enough nonetheless.

To be sure the pair has slipped quite sharply from its November highs in the 114.20 region when, back in the middle of the month it seemed at least possible that bulls would build a base there from which to have another tray at this year’s peak. That was the 114.54 reached on October 3.

Fundamentally speaking a new bout of risk aversion and, apparently, increasing doubts about the number of US rate increases that will come next year, have seen the Yen gain. However, technically, USD/JPY remains well above the 111.89 region where that uptrend comes in. 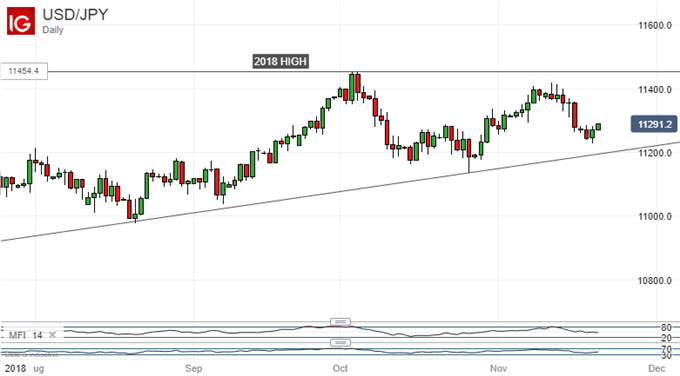 For as long as the pair can stay on top that point, then weakness looks more corrective than sinister for US Dollar bulls. For now it might make sense to keep an eye on the fate of a band of support which has been in place since October 10. USD/JPY has edged back into it but, so far, has also been confined to its upper reaches on a daily closing basis. 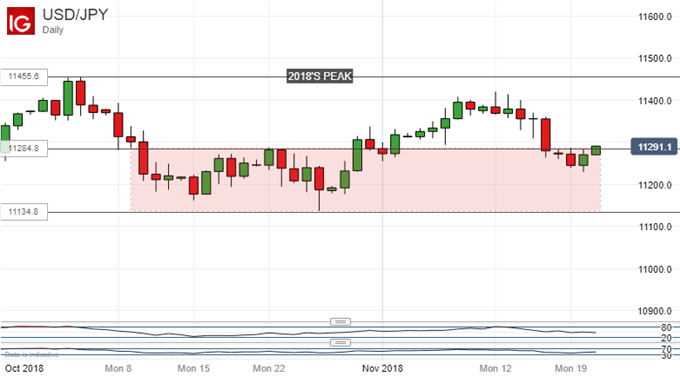 If it can hold there, or trade back above this zone, then its reasonable to assume that the underlying momentum remains with the bulls. For all that recent weakness the pair remains pretty close to those 2018 highs, and it would not be surprising to see it end the year above them if that uptrend holds.

The Australian Dollar looks rather more obviously feeble against the Japanese currency, with AUD/JPY flirting with a double top at the old August highs.

For the moment the second, 38.2% Fibonacci retracement of the recent rise up from October’s lows to the peaks of November 7 seems to be holding back the bulls, It comes in at 81.33. If this level can hold then Aussie bulls can still hope to negate that double top, but a slide back toward those October lows looks more likely at this stage, even if it may not quite reach them.