The latest German ZEW readings highlight the slowdown in Europe’s largest economy with the Economic Sentiment Indicator showing a marginal increase to -24.1. The reading remains heavily in negative territory and well below the long-term average of 22.7. In addition, the assessment of the current economic situation in Germany fell by 11.9 points to 58.2.

According to ZEW President Wambach, “The figures for industrial production, retail sales and foreign trade in Germany all point towards a weak development of the German economy in the third quarter. This is reflected by the fact that the assessment of the current situation has experienced a decline. The expectations of the survey participants for the coming six months do not show any improvement. This means that, at the moment, they do not expect to see a speedy recovery of the currently weak development of the economy.”

While the German figures point to regional weakness, the indicator for the current economic situation in the Eurozone dropped by 13.8 to a level of 18.2. “As a result, the outlook for the Eurozone has deteriorated even more than it has for Germany”, according to the ZEW President.

In addition to German economic weakness, the single currency may come under additional pressure from the outcome of the Italian budget skirmish between Brussels and Rome.

Euro to Sink Further as Rome Clashes with Brussels Over Budget. 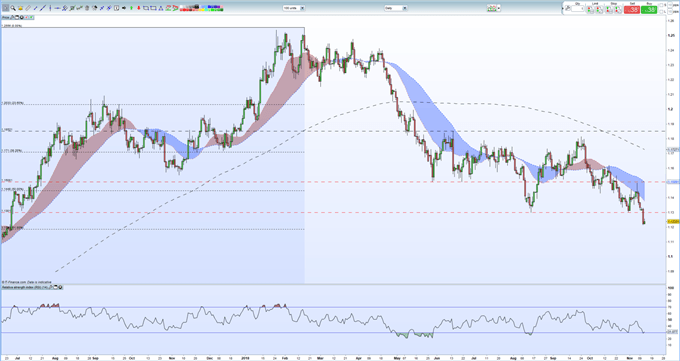