Asia Pacific stocks had Tuesday to follow a US session that saw the Dow shed more than 600 points and, sure enough, most major regional bourses were lower on the day.

Wall Street was hit by reports that the Trump Administration was studying tariffs on car imports, also by a weak performance from Apple shares, which, as ever, rippled out into the broader tech sector. The California based titan slid as investors worried about demand for its iPhone flagship. Europe was also providing its share of concerns, with the chances of any likely Brexit deal passing the UK parliament still in severe doubt, while the European Union and Italy are at loggerheads over the latter’s budget proposals.

Given all of the above its perhaps not surprising that the Nikkei 225 should have been down more than 2% as its Tuesday closed loomed. Australia’s ASX 200 was down 1.7%- the big four local banks were under special pressure there. The Hang Seng shed 0.5% with only Shanghai showing resilience. It was in the green by 0.4%.

The US Dollar remained broadly supported by a lack of overall risk appetite, holding near 16-month highs against a basket of its major traded rivals. The same worries about trade and Europe have beset the currency market, although the Japanese Yen pared its own gains, having done quite well recently in the ‘battle of the havens’ with the Dollar.

USD/JPY seems to be hanging on within the dominant short-term uptrend channel that has marked trade since late October. 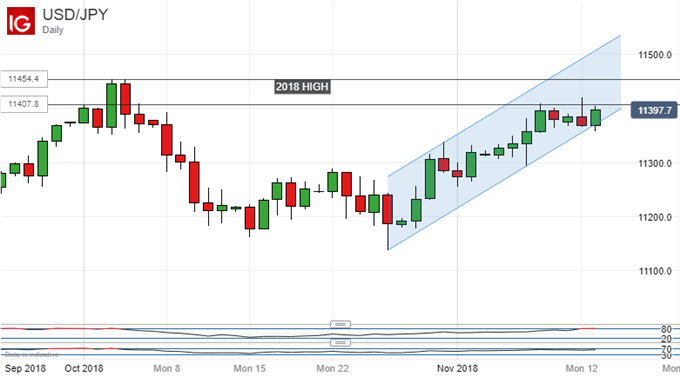 Tuesday’s trade seemed to threaten a break lower but now the session seems likely to end with that channel intact, which should keep bulls’ eyes on the 2018 high.

The remainder of the global day is not replete with key economic numbers but the UK’s official employment data and Germany’s ZEW business survey will probably attract investor interest.