Sterling’s two-week rally came to an abrupt halt late Thursday after the EU once again rejected PM Theresa May’s Chequers plan, putting Brexit negotiation risk back on the table. All the positive talk and sentiment leading up to the informal EU meeting in Salzburg was brushed aside after Donald Tusk, European Council President, said the plan ‘would not work’ and that the UK would have to go back to the drawing board.

Sterling’s rally has been built upon growing consensus that the EU would be more flexible going forward into the October EU Summit meeting and that now needs to be reassessed after the latest official EU commentary. PM May now faces a rebellious Conservative Party with a growing faction now looking for a no-deal Brexit, believing that the Chequers proposal did not go far enough. The annual four-day Conservative Party conference starts on September 30 in Birmingham and is now seen as a platform for hard Brexiteers to vent their anger, leaving the PM’s leadership in doubt.

A look at the four-hour GBPUSD chart shows that the recent, dominant, uptrend is coming under pressure. Thursday’s early rally was mainly fueled by a weak US dollar which sold-off heavily during the European morning. The uptrend from the September 5 low at 1.27850 is now being challenged and a break and close below will see further losses. The downside is protected by psychological support at 1.32000, followed by the 20-day moving average – which held recently – around 1.31870. Below here the 50-day moving average at 1.31170 comes into play and should provide solid support.

IG Retail Sentiment shows that traders are 54.8% long of GBPUSD - normally a bearish signal - but recent sentiment shifts give us a mixed trading bias. 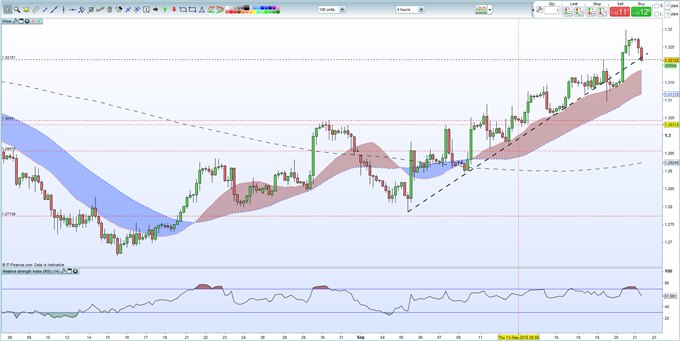 DailyFX analyst Paul Robinson’s latest video on how to become a better, more consistent trader is a must listen for market participants seeking an edge. As Paul notes early in his piece, ‘Markets are too dynamic, full of too much uncertainty, to try and navigate them without a framework in place. Trading plans are imperative for creating consistent results'. Becoming a Better Trader – How to Create a Trading Plan.