Sterling Week Ahead: Brexit Turbulence Will Weigh on GBP

DailyFX Q3 Trading Forecasts have just been released for a range of currencies and commodities, including GBP and USD.

GBP Will Dance to The Brexit Tune

It’s likely to be a long week for UK PM Theresa May as Conservative hardliners ready themselves for clashes over the UK’s recent Brexit negotiation bill. Last week’s White Paper disappointed many Brexiteers who will get a chance to scupper the proposal over the next two days when various bills are voted on in Parliament. With PM May’s position under increasing scrutiny, any further defeats on the Brexit proposal could spark a vote of confidence which would ultimately lead to her demise. The EU are also expected to comment on the UK’s White Paper and any further demands for concessions may well derail the process for good.

GBP Hard Data May Prove Supportive for The British Pound

A slew of UK data this week with all eyes on Tuesday’s employment and wages release and Wednesday’s inflation numbers. In addition, BOE’s Carney, Cunliffe and Stheeman testify to the Treasury Select Committee on Tuesday on the Financial Stability Report. UK employment is expected to remain at a near four-decade low while inflation is likely to edge higher, fueling thoughts that the UK central bank may hike rates at the next MPC meeting on August 2.

The British Pound is likely to remain volatile over the next few session and traders should watch out for various levels of support and resistance: 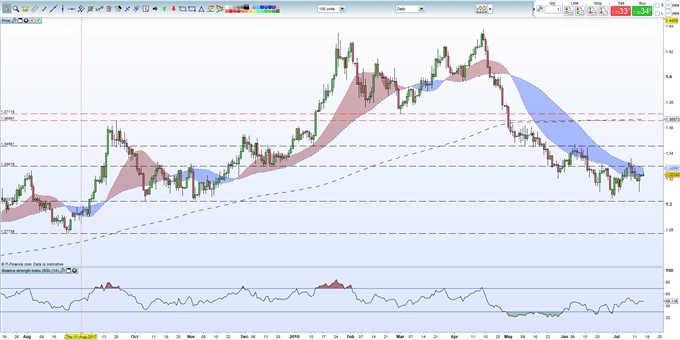