Gold prices finished Monday’s session little changed as the US Dollar experienced a similar behavior. During the second half of the day, aggressive declines in the British Pound on Brexit uncertainty as UK Foreign Secretary Boris Johnson resigned and lower BoE rate hike bets offered a boost to the greenback. Thus, the anti-fiat yellow metal quickly found itself paring gains from the first half of the day.

From here, a lack of key US economic data will have the greenback focusing on the external front. More Brexit uncertainty and lower BoE rate hike bets can boost it, adding downside pressure to the yellow metal. Gold may also respond to German and Eurozone sentiment reports depending on how the Euro interacts with the USD. The downside risk here is if 2019 ECB rate hike bets get pushed out further, making the greenback more attractive.

Crude prices on the other hand will look to API estimates of weekly US oil inventories. Official EIA projections are calling for a 3.9m contraction later this week. A higher-than-anticipated reduction may revive upside momentum in the commodity and vice versa. However, continued uncertainty around supply disruptions amidst US sanctions on Iranian oil exports could undermine a lasting response to the API estimates.

Gold prices have bounced higher after failing to push below the December 2017 low around 1,236, forming a channel of support. Heading into the recent push higher, positive RSI divergence warned that downside momentum was ebbing. Since then, near-term resistance appears to have formed around the 61.8% Fibonacci extension at 1,258. A daily close above this area exposes the 50% midpoint at 1,267. 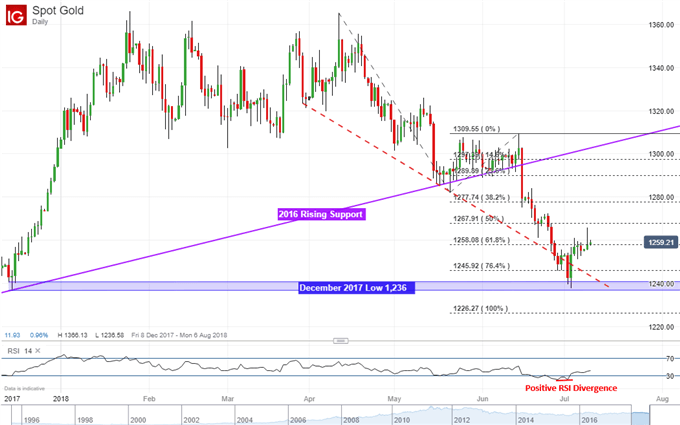 Crude oil prices are struggling to regain upside momentum after pushing above the May high at 72.87 as indicated by negative RSI divergence. This suggests that the commodity may turn lower in the near-term but a reversal would need some confirmation first. From here, immediate support is at 70.88 or the 50% midpoint of the Fibonacci retracement. A break below exposes the 38.2% extension at 69.12. 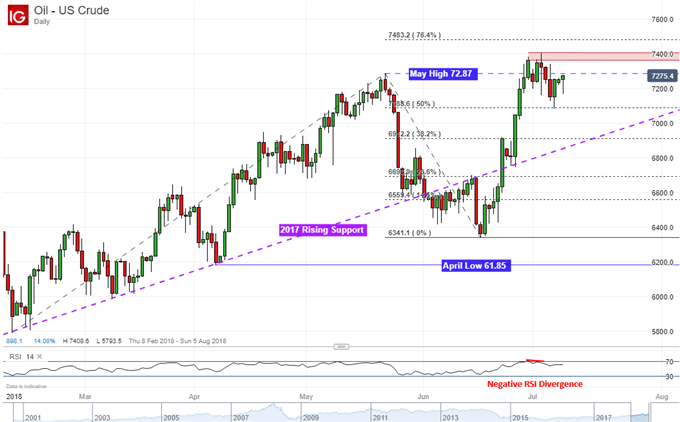