The Japanese Yen strengthened on Friday thanks to news that Japanese workers were taking home a lot more cash.

Cash earnings from labor rose 2.1% on the year in May, hugely above the 0.9% expected and the highest such rise of any month this year. Real cash earnings were up by 1.3%. They’d been forecast to be flat and had fallen by 0.2% in April.

These data are of course watched for any likely pass-through into the official Consumer Price Index inflation numbers, which determine monetary policy. At last look, annualized CPI gains were running at just 0.8% despite years of heavy economic stimulus aimed at getting them sustainably to 2%. Bank of Japan officials continue to insist that there is some price momentum in the economy, but they have also pleaded with business to raise wages in an effort to stoke consumer spending.

The latest wage numbers may well give them leeway to continue with both propositions, and the Japanese Yen duly made some gains after the release. 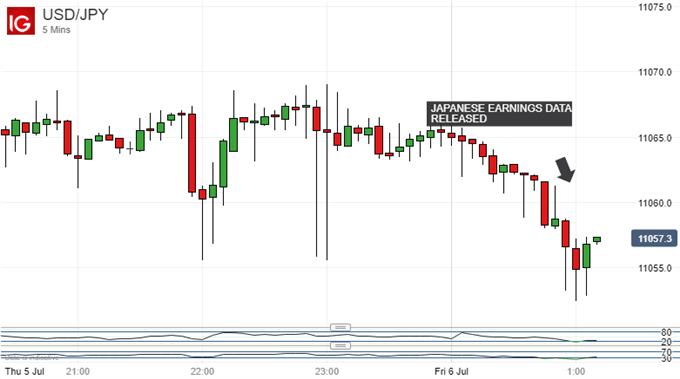 However, the figures came after some much gloomier ones. They which showed May’s household spending in freefall. It slid by 3.9% on the year, the worst collapse since August 2016. It seems that if households really were better off for their increased May earnings, they were not inclined to spend much of them.

Both series will bear close examination in the months to come.

On its daily chart, USD/JPY remains in a clear uptrend channel but its momentum could be peaking. The pair’s most recent upward foray has failed to surpass convincingly either its most recent significant peak, made on June 15, or May 21’s top of 111.42. Still, Fibonacci retracement support at 109.85 looks solid enough and it in any case some way above the upside channel’s base, so Dollar bulls still have reason to hope. 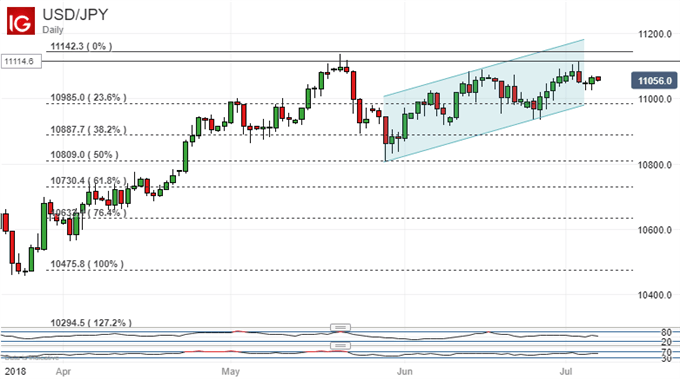