Asian Stocks Mixed as NZD/USD Aims for a Breakout, BOE Next

Similar to what we saw yesterday, Asian stocks were mostly mixed amidst a lack of escalation on trade wars between the two largest economies. Though we did get some commentary from China’s Commerce Ministry Spokesman. Gao Feng said that the country is on standby to retaliate if the US issues a new tariff list. He then added that they would continue to further open up their economy despite the trade disputes.

The Nikkei 225 was up more than 0.5 percent and was aiming for its highest point since Monday by afternoon trade. Australia’s ASX 200 rose more than one percent to a new 2018 high and was heading for its largest weekly gain since 2016. Shares in China and South Korea fared worse though. In the former, the Shanghai Composite was down about 0.20%. In the latter, the KOSPI fell about 0.46%.

On the FX side of things, the New Zealand Dollar was sharply lower during the Thursday Asian trading session. After the passing of a local in-line GDP report, NZD/USD began a descent that was accompanied with falling New Zealand government bond yields. Then, a 20-year bond auction saw less demand and a lower yield. This suggests a flatter outlook for RBNZ rates in the long-term in terms of a yield curve.

Meanwhile, anti-risk currencies like the Japanese Yen and Swiss Franc depreciated as demand for havens once again dwindled. The US Dollar was cautiously higher against its major counterparts, further weighing against other relatively higher-yielding currencies such as the Kiwi Dollar. Though the Australian and Canadian Dollars edged slightly higher as well.

Ahead, top tier economic event risk is the Bank of England rate decision. No rate adjustment is expected there making policymakers’ forward guidance the essence of the event. Overnight index swaps are pricing in a 45.7% percent chance that the BOE will raise rates next in August. This can open the door to British Pound losses if Governor Mark Carney shows hesitation to act soon. Which by the way, he has a press conference towards the end of Thursday’s session.

On a daily chart, NZD/USD has been pushing lower since stalling around the early June highs. Negative RSI divergence preceded the descent, allowing for an early warning sign. The pair has now fallen below a near-term rising support line and is now testing a daily close below the May 16 low at 0.6852. Such an outcome would mark its lowest point this year so far and opens the door for further losses. 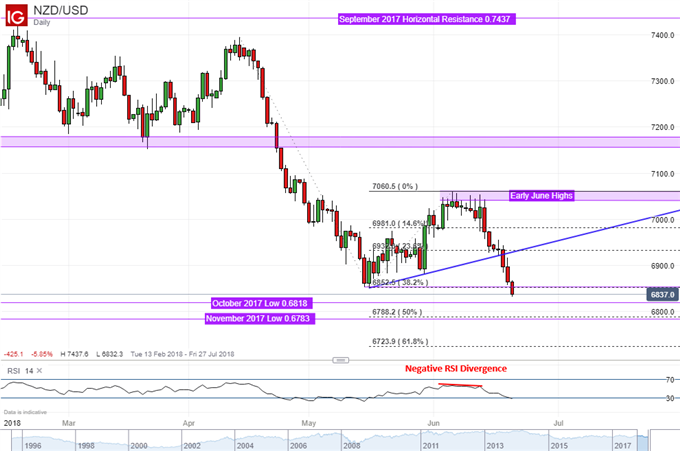