Chinese Australian Imports Rise but AUD Does Not, May Fall Rather

The Australian Dollar headed lower after May’s Chinese trade data crossed the wires. In both Yuan and US Dollar terms, China’s surplus missed expectations. This suggests a lower-than-anticipated boost to local economic growth as net exports are one of the four components of GDP. However, in both measurements, exports and imports rose above estimates.

As you can see above, imports in dollar terms rose 26.0% versus 18.2% anticipated. Since the trade balance subtracts imports from exports, it is not surprising to see a weaker-than-expected trade surplus on both ends. Interestingly, imports from Australia rose 22.4% y/y. In addition, Chinese external iron ore purchases summed up to $6.26 billion from $5.88 billion in April.

For Australia, those results can bode well for growth. This is because China is Australia’s largest trading partner. Keep in mind, crude materials are the largest portion of Australian exports. Thus, economic performance in the former can have knock-on impacts for the latter. If such a scenario also leads to higher inflation expectations and increase RBA rate hike bets, then the Australian Dollar could benefit.

But this was not the case, local bond yields were unchanged amidst the Chinese data. If you take a closer look, the sentiment-linked Australian Dollar was already heading lower into the data release. This may have been due to a decline in sentiment during the Asian trading session. The Nikkei 225 was down 0.31% after echoing declines from the US session amidst a flight to safety ahead of the week-end G-7 leaders summit.

In fact, during the early hours of Friday’s Asia session, US president Donald Trump arguably increased tensions ahead of the meeting and further soured sentiment. In a tweet, Mr. Trump called Canada’s Prime Minister indignant. He then threatened to add more tariffs on the European Union. With that in mind, the Australian Dollar may continue declining if risk trends keep suffering.

If you would like to learn about the history of trade war developments from 1900 until the present, check out our Trade Developments Inforgraphic ! 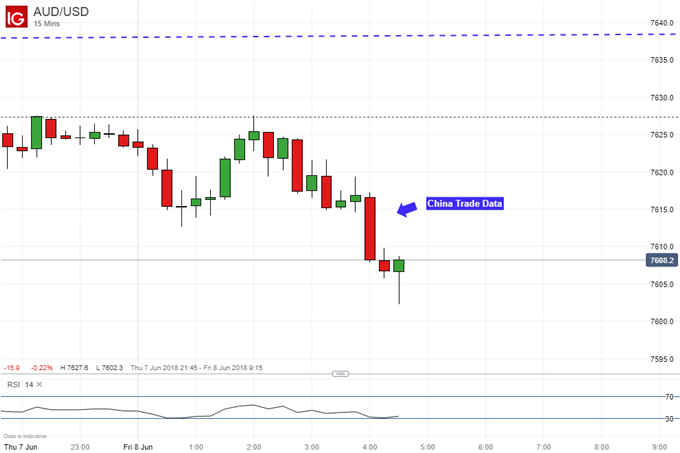 On a daily chart, AUD/USD appears to be heading lower after failing to push above the February falling resistance line and the long-term January 2016 line. From here, immediate support is 0.7591 which acted as stubborn horizontal resistance towards the end of May. A break above that would expose a rising support channel from last month. 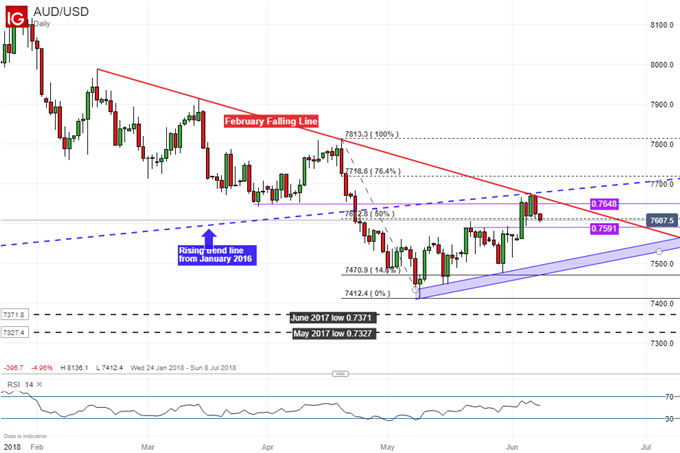