The Eurozone faced an overall miss of important economic indicators on Wednesday with the drop in consumer confidence ending the day’s run. Although the indicator dipped only slightly from the previous month, it also fell well short of the forecasts for improvement made by economists. The consumer confidence survey for May was 0.2, a decline from 0.3 in April and short of the 0.5 forecast. The decline in confidence does not come as a complete surprise as multiple uncertainties continue to dampen the zone’s stability.

The collection of European economies will continue to face significant risk in the coming weeks as the Italian people await the confirmation of their new government. Five Star movement’s leader, Luigi Di Maio and Matteo Salvini’s Northern League met with Italy’s President, Sergio Mattarella, and put forward Giuseppe Conte as their proposed candidate for prime minister, a law professor with no political experience. Both parties – and presumably their Prime Minister candidate – have supported an anti-EU and anti-Euro view during the campaign and after the election. As the political situation remains in flux, so too does the direction of Italy for the foreseeable future, an unsettling proposition for the EZ. Similarly, trade war fears continue to dampen the economic outlook as US President Donald Trump recently stoked trade tensions with China after positive progress was cited with China. Furthermore, some EU members continue to face risk of steel and aluminum tariffs. In a move to combat the tariffs, the EU submitted a list of “rebalancing” duties to the WTO, due to be imposed on the US if talks do not progress. See the recent history of trade wars in our infographic here.

In addition to the general risks, the European docket had also issued a range of PMI figures for the Eurozone and its largest members – where nearly all of the readings slid from previous month’s updates and significantly disappointed. The Eurozone composite PMI – a proxy for GDP – printed at 54.1 in May versus the previous month’s and forecasts’ 55.1. As we look to markets, the slew of negative data has taken its toll on the Euro as well as the individual EU indices with widespread declines for the day. The Euro forfeited ground to the Dollar and Yen, but remained unchanged versus Sterling. The Euro Stoxx 50 dropped -1.45% as European economies digested the negative indicators and a general ‘risk averse’ sentiment across the global markets. Downward pressure will likely continue for the Eurozone economies into the foreseeable future until trade uncertainty and the Italian political situation are resolved. 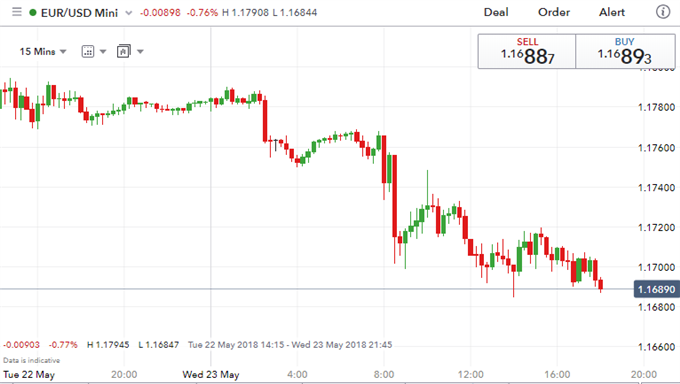 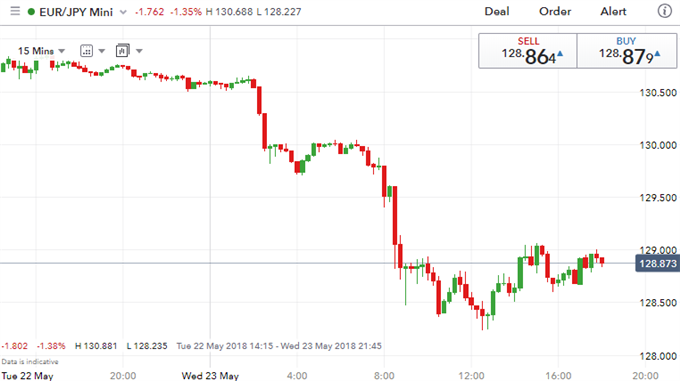